You are here: Home / MidEastGulf / After the defeat of ISIS, Al-Hashd Al-Shaabi is under pressure

Commander of the Ninevah Volunteers: there is no place for militias in the battle for Mosul. 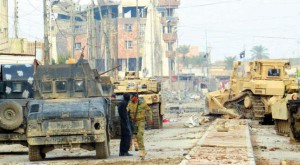 Leaders of armed Shiite factions in Iraq, most of which are part of Al-Hashd Al-Shaabi , fear the extension of covert operations which were meticulously carried out by American special forces in recent weeks against ISIS in northern Iraq. According to senior Iraqi sources that spoke to Asharq Al-Awsat, the leaderships of the armed Shiite factions fear that they will be subject to similar American operations in the future.

A source close to the Iraqi president who asked not to be identified told Asharq Al-Awsat that “the special operations that America is carrying out are nothing more than part of what the Iraqi government requested from the Americans in light of the security agreement signed by both parties in the year 2009”. Hakim al-Zamili, the head of the Iraqi parliament’s defence and security committee and a leading figure in the Sadrist Movement, believes that these operations do not aim to eliminate ISIS but rather aim to achieve American interests.

On the other hand, Athiel Al-Najifi, the leader of Al-Hashd Al-Watani which is formed of people from the governorate of Ninevah said that he cannot talk about dispensing with Turkish support in the battle to liberate Mosul, especially in the absence of an alternative. He also stressed that there is no place for Al-Hashd Al-Shaabi militias in that battle.