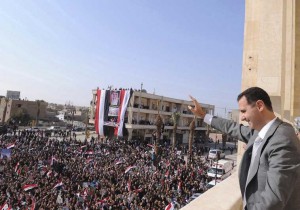 The West should involve Syria’s President Bashar al-Assad and his allies Iran and Russia in order to combat Islamic State, Austria’s foreign minister said on Tuesday in a state visit to Tehran.

“In my opinion the priority is the fight against terror. This will not be possible without powers such as Russia and Iran,” Sebastian Kurz told reporters.

“We need a pragmatic common approach in this respect including the involvement of Assad in the fight against Islamic State terror.”