You are here: Home / Senza categoria / After Paris, Tunisia and California, what next? 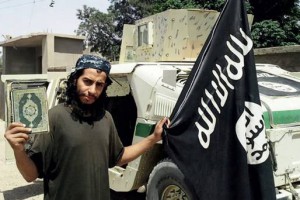 On a bleak day in November, Annelise Augustyns led her two kids to the playground near their home in Brussels. Just over a week before, Islamic militants had killed 130 people and injured many more in attacks in Paris.

The Belgian capital had been under unprecedented lockdown for three days amid fears of a new attack there. Several of the Paris attackers had been traced to the Brussels neighbourhood of Molenbeek, a few miles from Augustyns’ apartment. They included at least one man who was now on the run.

If the scenes were reminiscent of earlier conflicts, the enemy now was very different: a hybrid terrorist and insurgent entity in the Middle East calling itself the Islamic State. Augustyns, a local government administrator, glanced at the armoured vehicle posted outside the entrance of the Gare du Midi. “We are worried of course,” she told me. “But what to do? We have to get on with our lives.”

Her words summed up the feelings of many across Europe that week, and indeed across much of the world last year. If 2014 was a year that set a grisly new record in the number of casualties inflicted by terrorist attacks – 33,000 people were killed, almost double than the year before – then 2015 appears to have been worse.

Few expect 2016 to be much better. Alert levels are high all across the west. A review of terrorist attacks over the past two years suggests some possible answers, and one notable element has been the intensity of the violence.

According to a recent study, “mass-fatality terrorist events” – in which more than 100 people are killed by terrorists in one country in one day – occurred just over four times per year on average between 1978 and 2013. In 2014, there were 26. In 2015, the number is equivalent or higher, depending on how many of the massacres carried out by Isil and Boko Haram, the extremist movement based in Nigeria, are counted.

A second dimension in 2015 has been violence over a new geographic range. In November alone there were the Paris attacks, bombings in Beirut which killed 43, plus the downing of a Russian passenger jet over the Sinai with 224 people on board, a raid on a hotel in Mali, attacks in Nigeria killing more than 80, a dozen or so dead in Somalia, many more killed in Iraq and Syria, significant violence in Afghanistan, stabbings and shootings in Bangladesh, and deaths in the Asia-Pacific region.

Then two days into December, a young couple – Tashfeen Malik and Syed Farook – killed 14 people at a clinic in San Bernardino, California.

Most terrorist violence in the past year has been concentrated in the Middle East. As has long been the case, it is Muslims living in the Islamic world who have suffered most.

However, the year was notable too for the clear targeting of westerners, first in Syria, then elsewhere in the Islamic world. Twenty foreign tourists died in an attack on a museum in Tunisia in March. Thirty Britons were among 39 killed on a beach there in June.

Finally, westerners were targeted at home.

A third element that has marked the year is the pre-eminence of Isil among extremist groups. The veterans of al-Qaida clearly lack the energy or capability necessary to compete with the breakaway group led by Abu Bakr al-Baghdadi.

The final obvious element that has determined the shape of the violence in 2015 – and no doubt that to come in 2016 – is the evolution of the conflict in Syria. US officials insist that Isil is being seriously degraded, suffering significant loss of middle and senior commanders as well as material.

Some analysts suggest that the extension of terror by Isil to Europe was prompted by this new weakness. But there is evidence that its French operations were planned at least a year ago, and other experts argue that Isil is still strong, even if it appears to have hit significant obstacles to further expansion of its core territory in Syria and Iraq.

Recent diplomatic and military moves – Russia’s offensives, the UK’s bombing, the new resolve from the US and others – may begin to have an impact in coming months, however few anticipate a sudden collapse of Isil in the near future.

And, even if in 2016 Isil recruits find the new caliphate is harder to reach, returning home from it more difficult and the chances of being killed there much higher, this will not deter everybody. In Brussels last month I interviewed the mother of one man who had travelled to Syria and been killed in the fighting. I also spoke to a young woman who had been stopped from travelling to the war zone hours before her planned departure.

Each explained the attraction of Isil in different ways, but central to both was the belief that the group had created a just and equal society that was an attractive alternative to their current lives. Both were profoundly ignorant of the reality of Isil and blind too to realities at home. “I was totally radicalised. I was not thinking my thoughts. I was not who I am,” said Maysa (19).

Neither set out to be suicide bombers or killers. “It happens stage by stage,” a social worker in Molenbeek said. Important for the young man was the sense of adventure and empowerment, his mother told me, sobbing gently.

And crucial for both were social networks. Research by Oxford University this year revealed that 75pc of extremists had been drawn into activism by friends and family.

This had long been clear for the so-called “lone wolves”. Even those rare individuals who act alone are born out of the broader extremist environment that has many causes, ranging from the legacy of relatively recent conflicts, such as the invasion of Iraq, to the preaching of hardline conservatives from the Gulf over decades. This “social movement” of extremism has become much more active and intense since the advent of Isil.

One country with an astonishingly high number of volunteers per capita is the Maldives, the luxury tourist destination.

There I interviewed worried security officials and angry, mobilised teenagers. “Syria had a really big impact. It made jihad popular and appealing in some ways,” said Azra Naseem, a researcher at Dublin City University, who is from the Maldives and specialises in radicalisation.

Those responsible for the Paris attacks were young Frenchmen, exposed from an early age to a toxic mix of geopolitical and religious misconceptions, with histories of petty crime and gang-like behaviour. Several were from Brussels and had, in the words of one educator in Molenbeek, set out to join the “baddest gang of all”. Once in Syria, in a brutalising, violent, radicalising environment, they became killers themselves.

So what does this mean for the year to come? Expect stabbings by solitary attackers and attempts – hopefully unsuccessful – at coordinated mass casualty strikes. However, all attacks are likely to feature elements that have become standard over recent years.

One feature will no doubt be the suicide of attackers. This tactic has become an integral part of terrorism, but its ubiquity is relatively recent. Fifteen years ago it was a relative novelty outside specific theatres such as Turkey, Sri Lanka, south Lebanon, Israel and the occupied territories.

Now 2015 is set to rank joint-second in the number of suicide attacks since the tactic was first seen in the early 1980s.

Attacks will probably also increasingly resemble executions, and executions will increasingly resemble terrorist attacks. Both, in a sense, fulfil the same purpose: to terrorise, mobilise and polarise through spectacular and public violence. Shooting prisoners for a propaganda video or firing an automatic weapon into a crowded concert hall or clinic are different only by degrees.

The exploitation of modern media will also continue to evolve. All terrorists seek attention, though sometimes for different reasons.

Al-Zawahiri warned his al-Qaida militants against “dying in silence”. He wanted them to radicalise swaths of the Middle East’s Muslims through their sacrifice. Isil aims to create noise and strife, destabilise and weaken governments and set communities against each other. The resultant fissures will eventually allow the extremists to move in and grab territory.

New technology has allowed even so-called “lone wolves” to run media operations of a sophistication that was beyond entire organisations a decade or so ago. Many recent attackers have used miniature GoPro-type cameras, wearable equipment designed for extreme sports, to capture images of their horrific acts.

So far none of this footage has been broadcast. At some stage it will be.

It appears the Paris attackers did not carry such equipment, but this is not necessarily good news. As Osama bin Laden, the mastermind behind the 9/11 attacks, recognised, the best way to guarantee airtime is to create carnage in the heart of a western capital.

The terrorist today knows too that what the mainstream media miss – or decide not to show – may well be filmed by ordinary people on mobile phones and eventually broadcast anyway.

Terrorism, as a series of scholars has noted, comes in waves. Could 2016 be the year that the tide begins to ebb? No one knows.

It could be that the new threat from Islamic militancy will be rapidly countered by our reinforced security services, Isil will fragment, the ideology of extremism will cease to appeal and the trend towards a greater intensity, geographic range and frequency of attacks seen since 2010 will reverse.

But this is perhaps too optimistic, or at least premature. First, each wave of Islamic militancy has left scars that have made countering the violence of its successor that much harder. This decade has certainly seen a perfect storm of factors to create violence, but these have acted within an environment created and conditioned by the trauma of the immediate post-9/11 wars. Scars are now overlaying scars.

Second, previous waves have peaked only after half a decade or more of sustained violence. The killings have fallen away slowly too. There seems no obvious reason to think this wave will be any different.

Things will eventually get better, but there will be many more deaths before they do.