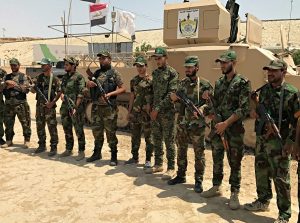 In the wake of victory against the Islamic State group in Mosul, Iraq’s political, religious and military leaders are debating the future of the country’s powerful Shiite militias — the tens of thousands of men who answered a religious call to arms three years ago and played a critical role in beating back the extremists, like reported by airforcetimes.com .

Some are demanding the mostly Iranian-backed forces be disbanded but the militias say their sacrifices on the battlefield and the fact they were sanctioned by Iraqi Prime Minister Haider al-Abadi have earned them a permanent place in the hierarchy of Iraq’s security forces.

The Shiite militias stepped into a vacuum when the Iraqi army largely dissolved after IS overran Mosul and pushed within 80 miles (130 kilometers) of the Iraqi capital.

Shiite Sheikh Fadil al-Bidayri was among the clerics at an emergency meeting in the holy city of Najaf in June 2014, when Iraq’s Shiite religious elite — led by the country’s top Shiite cleric, Ayatollah Ali al-Sistani — issued a call to arms as a last-ditch effort to protect Baghdad.

Tens of thousands of men, many of them members of the long-established Shiite militias with close ties to Iran, answered al-Sistani. In the days that followed, Iraq was flooded with training, money and weapons from Tehran. Billboards praising the groups — depicting Iraqi and Iranian paramilitary leaders side by side — popped up across Baghdad, alongside posters of martyrs honoring the fallen.

The government-sanctioned groups became known as the Popular Mobilization Forces, known as Hashed al-Shaabi in Arabic.

Although the Shiite militias did not play a central role in the battle for the city of Mosul itself, they moved into the deserts held by IS west of the city, massing around the town of Tal Afar and taking a border crossing between Iraq and Syria. They also took control of highways bisecting the Sunni heartland in western Iraq and used as vital military and civilian supply lines.

In past fights against IS, including the operation to retake for the cities of Tikrit and Fallujah, the Shiite militias were accused of sectarian killings and other abuses against minority Sunnis. They acknowledge some abuses may have occurred but say those responsible have been disciplined.

Over the past three years, as the military fight against IS in Iraq pushed the extremists back, Iran’s influence in the country grew.

“We always knew that Iran would use this (call to arms) to increase its own power in Iraq, but we had no other choice,” said al-Bidayri, recounting the meeting in Najaf and the panic-filled days after the 2014 fall of Mosul.

Al-Bidayri says now that Mosul has been retaken and the Iraqi military has been partially rebuilt, he believes the Shiite militias should be disbanded, to curb Iranian influence in Iraq and reduce sectarian tensions. The elderly sheikh, like much of Iraq’s religious establishment in Najaf, is a staunch nationalist and wary of Iran’s growing influence.

“From the very beginning … Iran used every opportunity to get involved in Iraq,” al-Bidayri said. “Each time they used the protection of the Shiite people as an excuse.”

Iraq’s influential Shiite cleric Muqtada al-Sadr also called for the militias to disband during a March anti-government rally that saw thousands of his supporters fill the streets of Baghdad.

According to the 2017 Iraqi budget, the government-sanctioned Popular Mobilization Forces now number about 122,000 fighters. The umbrella is dominated by Shiite militias but also includes Sunni and Christian groups.

“The Hashed (Shiite militias) will remain . and our relationship with Iran will remain,” said Hadi al-Amiri, a senior leader of the Badr Brigade, one of Iraq’s most powerful Shiite militias.

Al-Amiri said IS’ insurgent capabilities will pose a long-term security threat to Iraq after the military fight against the group is concluded.

Iraq’s prime minister has also repeatedly professed his backing for the Popular Mobilization Forces, telling reporters at a press conference last week that they “must remain at least for years, as the terrorism threat still exists.”

When asked if the Shiite militias would play a role in the fight for Tal Afar or move into Syria, Ahmad Ghanem, a member of the Popular Mobilization Forces training at a camp in Najaf said “we are waiting for instructions … ready to move wherever they order us.”

As the conventional fight against IS winds down, it’s unlikely Iraq’s existing security forces will be able to absorb all the militia factions.

“If you add up all of the demands from all the different factions and militia leaders, and then you look at how much actual power and money Iraq has to distribute to them, their claims are like 250 percent of whatever pie there is to be divided,” said Nathaniel Rabkin, managing editor of Inside Iraqi Politics, a political risk assessment newsletter.

Rabkin said he doubted the groups would be content with patrolling rural areas or hunting so-called IS “sleeper cells.”

“They want to have real power and control,” Rabkin said. “So I think there’s going to be a lot of disappointed people with small to medium-sized militias running around Iraq six months to a year from now.”

On the outskirts of Najaf, graves of militiamen who died battling IS have swelled among the plots in Wadi al-Salam, the well-known Shiite graveyard that is also the world’s largest. Garlands of plastic flowers adorn headstones bearing the crests of the most powerful militia groups: the Badr Brigades, Saraya Salam and Kataib Hezbollah.

Abdullah Abbas, a thin 18-year-old from Najaf, guarded a plot of graves of Katib Imam Ali fighters, a small militia closely tied to Iran and active both in Iraq and Syria.

In 2013, he left school at age 14, to become a fighter. The militia at the time mainly fought in Syria where it propped up President Bashar Assad’s government. Since then, he has bounced between Syria and Iraq.

Abbas said that if the government decides to dissolve the Shiite militias, he could easily find better paying work as a laborer. But he admitted he couldn’t imagine life without the purpose and prestige of being a militia fighter.

“I don’t think a normal life is an option for me now,” he said, shaking his head. “I can’t imagine going back to what it was like before.”