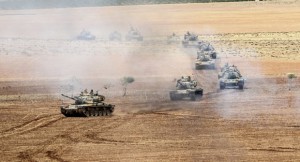 Also, hundreds of rebels from the Turkey-backed Sultan Murad Brigade and other Turkmen rebel factions accompanied the Turkish army in the advance towards Aleppo.

“The Turkish forces and allies have taken over al-Rae town north of Aleppo, turning the town into a military zone after claiming to have expelled ISIS militants from the area,” rebel spokesman al-Zein told ARA News.

“However, there has been no fight between the Turkish forces and ISIS in al-Rae, which shows that ISIS has actually handed the town over to Turkey,” he added.

This comes just one day after the Turkish government sent military reinforcements to the Syrian northern city of Jarablus, that’s been taken by the Turkish forces and allied rebels of the Euphrates Shield Brigades on August 24 without resistance from ISIS.

Subsequent to the Turkish advance in Jarablus, clashes erupted between the Kurdish-led Syrian Democratic Forces (SDF) and the pro-Turkey factions.

The SDF forces –that have recently liberated the city of Manbij from ISIS after nearly three months of clashes– said that ISIS has handed over Jarabulus to Turkey “within hours and without any resistance”.

Turkey has also vowed to continue fighting Kurdish rebels both on its soil and in Syria, considering them a threat to the territorial integrity of both countries.

“We will continue our operations (in Syria) until we fully guarantee security of life and property for our citizens and the security of our border… From the beginning we have been defending Turkey’s territorial integrity. We are also defending Syria’s territorial integrity. The aim of these terrorist organisations is… to form a state in these countries… They will never succeed,”