You are here: Home / MidEastGulf / After its defeat in Ramadi… ISIS transfers hundreds of vehicles secretly to these sites 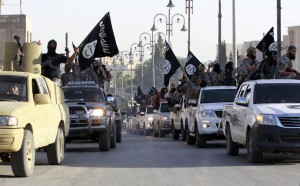 Official local sources revealed that ISIS has transferred hundreds of vehicles and weapons from Ramadi city to Mosul city after losing control on it.

Counter-terrorism forces have managed through an extensive process since a few days to regain control of Ramadi city and carried our mine clearance process.

The sources told Shafaq News, that the organization enter those vehicles and weapons into the city in the late hours of the night, taking advantage of a few passers-by with significant drop in temperature for the fact that most of them are affected and have effects of fierce battles that took place it liberation of Ramadi operations by the security forces, indicating that ISIS organization hid weapons in a number of mosques and residential buildings in the neighborhoods of Mosul, without worrying about the damage it might cause to the lives of unarmed civilians.

They added that the organization promoted the deployment of the elements in the main streets and important intersections of Mosul city for fear of the outbreak of the popular uprising against it or the occurrence of armed actions against reconciliation after its defeats in Anbar.

After the leadership of the Iraqi security forces announced the liberalization of the government complex in Ramadi city, which is the last stronghold of ISIS organization there, atmosphere of joy prevailed for this victory in the capital Baghdad and cities and in most of the Iraqi cities and Kurdistan region.