You are here: Home / MidEastGulf / After his Iran ‘success,’ Obama may try again on the Palestinian front 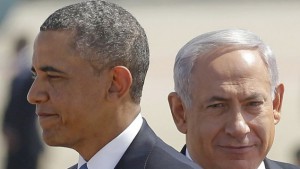 When a leading Israeli Middle Eastern affairs commentator warned this week in a private conversation that the nuclear agreement with Iran would have severe implications for the region, an American political science professor asked him: “What exactly do you, the Israelis, want now? You have been warning us about the Iranian nuclear bomb for years. You told us: Stop the bomb! And that’s what President Obama has done. The vast majority of commentators believes that he has held off the threat of Iran acquiring a nuclear bomb, if it does keep the agreement. But now you come and warn that the Iranians are going to take over the Middle East once the sanctions are lifted. So what exactly do you want?”

The American professor had a point. There was no real debate about the implications for the Middle East of a nuclear agreement with Iran. Prime Minister Benjamin Netanyahu warned time and again of the possibility that Tehran would acquire nuclear arms, even using a cartoon-style drawing of a nuclear bomb and red lines in his address at the UN General Assembly in 2012. But no one was talking about Iran’s status as the number-one state sponsor and exporter of terrorism.

While the deal is not a good one and could have been improved easily (the 24-day advance notice before inspection of a suspect facility is just one example), if honored it prevents Iran from reaching Netanyahu’s “red line.”

But that is not where the immediate trouble lies. The problem is one that was never spoken of until after the deal had been signed: Once Iran’s coffers swell by hundreds of billions of dollars, the Middle East is going to become even more turbulent than anything we have seen over the past four and a half years.

One can readily predict the immediate effect that the deal will have on Iran’s Revolutionary Guards, for example, and on the Quds Force, which is headed by Qassem Soleimani, who is in charge of employing terrorism throughout the world. Revolutionary Guards chief Mohammad Ali Jafari expressed his opposition this week to the UN Security Council resolution on the deal with Iran, saying that some parts of the agreement, mainly about Iran’s military capability, crossed Tehran’s red lines. “We will never agree to that,” he said.

But such rhetoric aside, Jafari and his forces will be benefiting from an enormous boost in budget a year from now. Soleimani, who is shuttling between Syria and Iraq and whose people operate secretly in all corners of the globe, will now be able to fly openly, first class, to any destination he likes in order to inject billions of dollars into terrorist infrastructures that are already up and running and to establish new ones.

Soleimani and his organization will not necessarily be focusing their efforts at Israel. Rather, their targets will be countries governed by Sunni regimes — Jordan, the United Arab Emirates and, of course, Bahrain (Iran’s 14th province, as Tehran would have it).

Saudi Arabia, which has a Shi’ite minority and a border with Yemen that is under Houthi control (the Houthis are Shi’ites), will be a target as well. At the same time, the Iranians will bolster pro-Iranian states and entities such as Syria, Iraq, Yemen, Lebanon, Islamic Jihad and, to a certain extent, Hamas, which is Sunni.

A boost for Hezbollah

As for Israel, and its civilian population, the deal upgrades the security threats even without an Iranian breakout to the bomb. The most visible and immediate case in point is Hezbollah, which is Shi’ite. If Hezbollah has between 100,000 and 120,000 rockets today, the boost in Iran’s budget once the sanctions are lifted will likely see it acquire tens of thousands more.

Hezbollah having 140,000 rockets instead of 120,000 (including long-range missiles) means that in any future conflict with Israel, it will be able to hold out for an additional month of fighting. And it will keep on firing rockets at Israel without pause, knowing that the money is there for resupplies. To give an old Hebrew cliché a modern riff: Apparently things that can be seen from Tel Aviv cannot be seen from Washington.

Iran’s investment in Lebanon will not stop at strengthening Hezbollah militarily. Tehran intends to expand Hezbollah’s control over Lebanon’s political establishment, and not necessarily by violent means. Lebanon has not had a president for a year already, and the presidency is its most important position. Hezbollah and Iran are already putting a great deal of effort into getting Michel Aoun, their ally, appointed to the post. For now, the political establishment is paralyzed.

The Lebanese army, which has come under Hezbollah’s protection, fights under its command on the Syrian border and acts in full coordination with Hezbollah in the south, on the Israeli border. Israeli assessments say that unlike in past wars, the Lebanese army will join the fight against Israel next time around.

The battle for Gaza

Things will not be quite so simple for the Iranians when it comes to Hamas, although they may well grow stronger there too.

Last weekend, Hamas’s highest-ranking members, led by Khaled Mashaal, met with King Salman of Saudi Arabia and Crown Prince Muhammad bin Naif. This was supposedly a dramatic and extraordinary gesture by Riyadh to Hamas and by Hamas to Saudi Arabia. According to several articles in the pro-Iranian press, Hamas made a clear decision to distance itself from Tehran and draw close to Riyadh in the battle for the Middle East’s future.

But the images coming from Saudi Arabia do not necessary reflect the reality in the Gaza Strip. The leaders of the Hamas military wing, together with several high-ranking officials in the political wing, are not enthusiastic, to put it mildly, about Khaled Meshal’s actions and his attempts to get close to the Saudis. As they see it, the future lies in Tehran, and the only money that Hamas is getting these days is coming from there, not Riyadh.

Hamas must keep a channel of dialogue open with Iran and Hezbollah in order to keep receiving funds from Tehran, they argue. Too dramatic an overture to Saudi Arabia could mean an emptying of the coffers; Hamas only managed to resume full salary payments to its workers this month, after a four-month hiatus, because Iran resumed its financial support.

Where will it lead? No one knows. But we cannot rule out the possibility that the rift between Mashaal and the military wing, together with figures such as Yahya Sinwari and Rawhi Mushtaha, will grow wider, until eventually the hostilities become open.

Now that President Barack Obama has got his Iran deal, and even as he focuses on pushing it through Congress, he will likely also try, in the year and four months until the presidential elections, to turn his attention to other urgent regional issues, such as Syria, and the talks or lack thereof between Israel and the Palestinian Authority.

On Syria, according to several high-ranking Arab officials who took part in recent Administration consultations, Obama’s inclination is to reach a deal with Moscow and China under which Syrian President Bashar Assad remains in power — not because Assad is an exemplar of democratic leadership, but because the alternatives are much worse.

True, this contradicts everything officials in Washington have been saying over the past two years, but Arab heads of state have learned first-hand that when it comes to policy in the Middle East, the US’s promises cannot always be trusted.

The moderate Syrian opposition is now almost nonexistent, having failed to gain any real foothold on the ground.

On the other hand, Islamic State, Al-Nusra Front and the other extremists are a regional threat. The Arab officials believe, as do many Israeli officials, that as far as the White House is concerned, the only option is to accept Assad’s remaining in power until elections are held at some undetermined date.

On the Palestinians, there’s a big question mark over what Obama may do now. Will he enter another confrontation with Benjamin Netanyahu, or choose to reconcile with him at the price of deadlocked peace efforts? The Arab officials who spoke with The Times of Israel said that Obama is far from putting aside his dream of a breakthrough, and perhaps even a deal between Israel and the Palestinians, even if that requires “immoderate” diplomatic pressure on Israel. The UN General Assembly meeting in September is around the corner; they predicted a new focus on the Israel-Palestinian conflict as it draws closer.

Obama has several options. He could decide to stabilize relations with Jerusalem, which remain tense over the Iran deal. But Netanyahu’s insistence on addressing Congress in March in an effort to scuttle the agreement, and his lobbying against it now, have left the White House angry and in the mood to “settle scores,” according to some insiders.

Obama could give the French a green light to move forward with a Security Council resolution setting a date for the end of the Israeli occupation and establishing the framework for the talks as well. Paris is currently waiting to see which way the wind is blowing in Washington.

Or he could send Secretary of State John Kerry back to the region to restart talks, for a period shorter than nine months, with the White House setting clear criteria for a peace deal.

A third, harsher option is for the US to propose its own Security Council resolution for the implementation of the two-state solution on the basis of the 1967 borders, leaving the details to be hashed out in talks between the Israelis and the Palestinians.

And finally, there is a fourth option: In his speech to the General Assembly, Obama could present his own peace outline, an “Obama Plan” — likely based on what he has said to Congress in the past, but this time set out in front of the world. While this option would be bad for Israel from a public relations perspective, it would lack teeth, though it could lead to a Security Council resolution later on.

A return to ‘lawfare’

And what of the Palestinians? I wrote here about 10 days ago that there has been a quiet understanding between Israel and the Palestinian Authority over the past several months. The Palestinians froze their anti-Israel efforts at various international organizations, while Israel took a series of measures that included slowing construction in the territories.

A high-ranking Palestinian official told me that the PA did not set much store by those understandings because of the composition of Netanyahu’s government and its weakness vis-à-vis the settlers. And since that article was published, the Civil Administration’s Planning Council has approved a plan to construct 886 housing units in the West Bank — after not having approved any new plans for a year.

Haaretz, which broke the story of the new settlement housing plans, claimed that moving forward with the plan was part of an attempt by Defense Minister Moshe Ya’alon to placate the settlers, who are protesting against a Supreme Court ruling upholding the demolition order against two illegally constructed buildings in Beit El. These new housing permits may well prompt the Palestinians to resume anti-Israel “lawfare.”

Would that prompt the Israeli government to reconsider? With a narrow coalition of 61 Knesset members, some of whom have threatened to take measures against the government if construction in the territories is not resumed, it seems not.