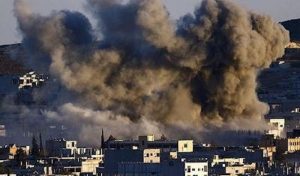 A bomb exploded in a four-floor building in the center of the Kurdish city of Afrin in northwestern Syria, killing and injuring 40 people, a Syrian monitoring group said according to kurdistan24.net.

The bomb exploded overnight on Sunday, and the state-run Anadolu Agency on Monday reported that seven of the casualties were civilians, and the rest were Free Syrian Army (FSA) fighters.

The bomb was planted by the US-backed Kurdish People’s Protection Units (YPG), which Turkey has designated a ‘terrorist group.’

The improvised explosive device (IED) detonated as the Syrian rebels were conducting a search after entering the center of Afrin along with Turkish forces on Sunday.

The Syrian Observatory for Human Rights on Sunday stated that about 40 members of the “Olive Branch” factions were killed and injured in the explosion the day they gained control of the area.

“[At least] 13 fighters [of the Syrian Forces loyal to the Turkish Forces] were killed, and more than 25 were wounded,” according to Syrian Observatory.