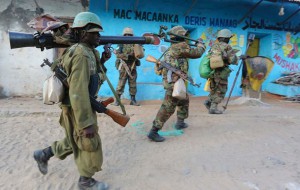 The withdrawal, a rare retreat after AU troops seized swathes of territory from the radical Islamists, includes the towns of Qoryoley and Awdhegele, which have since been taken over by Shebab in Somalia’s southern Lower Shabelle region.

The Islamic militants have stepped up their attacks during Islam’s holy fasting month of Ramadan.

“They pulled out of Qoryoley, there is not a single soldier left behind,” local government official Mohamed Haji Osman said. Residents reported that the Shebab had since moved in and hoisted their black flag over the town, some 80 kilometres (50 miles) southwest of the capital Mogadishu.

“Shebab fighters entered the town and their flag is flying over the district headquarters. All AMISOM and Somali troops pulled out,” said resident Ahmed Hassan.

“This is a complete setback because Al-Shebab is gaining ground,” he said.

The Shebab is fighting to overthrow Somalia’s Western-backed government which is propped up and protected by the 22,000-strong AMISOM force.

Last week, the Shebab attacked an AMISOM base in Lego village, 100 kilometres (62 miles) northwest of the capital Mogadishu, manned by around 100 Burundian soldiers.

The Shebab later boasted of having killed 80 soldiers and carried off the bodies of 60 of them, before setting the base on fire.

Video images taken by the Shebab and seen by AFP show several bodies scattered around the ransacked base, with one shot showing around a dozen bodies lined up.

“The enemy is fleeing from the region… this is the beginning of the fall of the Christian invaders,” he said.