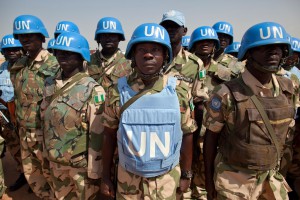 The African Union’s (AU) Peace and Security Council has proposed sending 5 000 peacekeepers to Burundi, invoking for the first time a rule which allows it to deploy a force without a country’s consent, a diplomat said.

Burundi, which UN officials say is on the brink of civil war, has said there was no need for a peacekeeping mission.

Asked about the latest proposal, one minister said he understood it was still a draft and so would not comment at this stage.

The AU decision, drawn up late on Thursday, needs approval from the UN Security Council, which has been considering options to resolve the crisis including sending peacekeepers.

“We have authorised the deployment of a 5 000-man force for Burundi whose mandate includes the protection of civilians,” a diplomat from a member country of the council told Reuters.

UN officials and Western envoys have expressed alarm at the escalating violence in Burundi, which only emerged from an ethnically charged civil war in 2005 after 12 years of fighting.

The United Nations said at least 400 people have been killed since April, when unrest erupted after President Pierre Nkurunziza said he would seek a third term in office.

The crisis pits opponents of the president’s re-election against loyalists.

The violence has unnerved a region that remains volatile two decades after a genocide in neighbouring Rwanda.

Unrest has mostly centred on capital Bujumbura, where insurgents attacked military bases on Friday. Almost 90 people died in the clashes.

The civil war had pitted the army, which was at the time led by minority Tutsis, against rebel groups of the Hutu majority, including one led by Nkurunziza.

“This (AU) resolution marks the first time the African Union decided to invoke its charter’s Article 4,” the diplomat said.

According to Chapter 4, the AU has the right to intervene in a member state “in respect of grave circumstances, namely: war crimes, genocide and crimes against humanity.”

The diplomat said the mission, labelled the African Prevention and Protection Mission in Burundi, would be comprised of the East African Standby Force. The force would seek to protect civilians and create conditions for dialogue.

The AU council asked the AU Commission’s chairwoman, Nkosazana Dlamini-Zuma, to submit within a week a list of individuals who would face sanctions.

Burundi’s presidency said on Thursday it was open to “broad-based inclusive dialogue”.

Opponents have dismissed similar pledges in the past, saying the government has not been willing to discuss core issues such as the president’s new term.