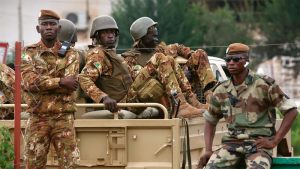 The new force would be a significant new player in the sprawling, arid region south of the Sahara Desert where fighters linked to al-Qaeda and the ISIS killed thousands of people last year – at times working together in an unprecedented move.

ECOWAS in September announced what Chergui called a “very bold” plan to counter extremism in the region, including mobilizing up to $1 billion through 2024.

“As you see and recognize yourself, the threat is expanding and becoming more complex,” Chergui said. “Terrorists are now even bringing a new modus operandi from Afghanistan and al-Shabab” in Somalia.

It was not immediately clear what the next steps would be in forming the AU force for the Sahel, which has become the most active region in Africa for extremist attacks.