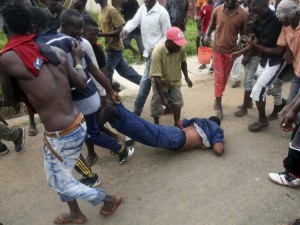 The African Union will send a mission to troubled Burundi to press the government to accept a peacekeeping force after the president rejected such a move, a senior AU official said after a summit on Sunday.

African leaders, who held a two-day summit, may also ask the UN Security Council to exert pressure with a possible sanctions threat if it refuses, a senior Western diplomat who followed the proceedings told Reuters.

Officials said a final communique was awaiting clearance from African capitals. The senior official and diplomat were citing its main points before it was endorsed.

The AU’s Peace and Security Council announced plans in December to deploy a 5,000-strong force, saying it could invoke an article of the AU’s charter that allowed it to intervene whether or not the government agreed.

President Pierre Nkurunziza, whose bid for a third term angered opponents and sparked months of violence, rejected it.

Western powers are pressing African states to intervene to prevent Burundi sliding back into the kind of ethnically charged conflict it witnessed in a civil war that ended in 2005.

“We want dialogue with the government of Burundi,” Smail Chergui, the AU’s Commissioner for Peace and Security, told reporters after the summit, saying a “a high-level” delegation would seek Burundi’s approval to deploy the force.

He did not give further details, but the senior Western diplomat said the AU was also expected to ask the UN Security Council to pass a Chapter 7 resolution, “which could mean sanctions if the Burundians remain defiant.”

Chapter 7 of the UN charter covers the council’s authority to enforce decisions with sanctions or military force.

The Western diplomat said he understood that African leaders had endorsed the peacekeeping force “with a mandate to disarm militias and protect civilians, in addition to a larger human rights observer mission.”

Those details could not be confirmed. When Chergui was asked if more AU monitors would go to Burundi, he told Reuters: “That question is too early.”

Yahya Jammeh, president of Gambia, which is on the 15-member AU peace and security council, had said on Saturday some African states were against sending any peacekeepers to Burundi against its will. He had raised fears the AU was wavering on the issue.

Violence in the nine-month-old crisis has already killed more than 400 people, in a country that emerged from an ethnically charged civil war in 2005.

UN assistant secretary general for human rights, Ivan Simonovic, told Reuters on Saturday that the African Union, if it did not send peacekeepers, should at least boost the number of human rights monitors it has there or send some police.

UN Secretary-General Ban Ki-moon, who has praised the plan for a peacekeeping force, has called for African action.

“We cannot wait any longer, that is why it is a matter of urgency, that I am urging African leaders to act in one voice,” he said in Addis Ababa, adding that Burundi’s government should “listen very carefully and engage in inclusive dialogue”.