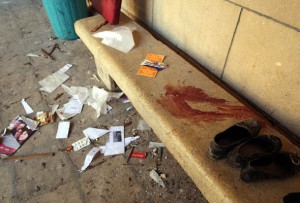 More than fifty people have died in several suicide bombings over the past 24 hours on the African continent – with Somalia recording the highest number of casualties.

Mourners packed a Cairo church on Monday for the funeral of the 24 victims, including 6 children, of the Sunday’s bombing of a Coptic cathedral. Most of the victims were women.

The attack on the Saint Peter and Saint Paul Churches is one of the deadliest on Egypt’s Christian minority in recent years.

President Abdel Fattah al-Sisi has announced three days of mourning. Sisi who attended the funeral has vowed justice. He is fighting battles on several fronts. His economic reforms have angered the poor.

In the Somali capital, Mogadishu, 29 people died when a suicide bomb exploded at the entrance to the port. At least 50 people were injured.

Al Shabaab has claimed responsibility for the attack. The organisation wants to impose its strict version of Islam on the Horn of Africa state, and drive out African Union peacekeepers.

Two girls thought to be only seven or eight years old, conducted a double suicide attack in the north-eastern Nigerian city of Maiduguri. Three people were killed and 17 others were wounded.

It appears the second explosion was triggered slightly later as bystanders were helping the wounded.

Boko Haram has been waging an insurgency for seven years, trying to establish an Islamic state.

Some 15 000 people have been killed and more than 2 million have fled their homes.