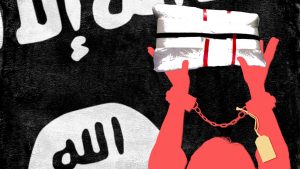 When Moussa, a people smuggler from Niger, workedwith jihadists from the so-called “Islamic State in the Greater Sahara” (ISGS), his task was to get inside Mali, pick up prospective migrants from the location the militants gave to him, and take them across the border to an encampment in Niger—the border village of Tongo Tongo, like reported by thedailybeast.com.

You may have heard of it. Tongo Tongo was mentioned in many recent news stories because it was the same village where four American Green Berets were killed in an ambush last October. But long before that incident Tongo Tongo was known locally as a place where jihadists trafficked migrants bound for Libya and, the migrants hoped, for Europe.

Some were children who had served the jihadists for a long time. Others were people who each paid militants about 200,000 CFA ($320) to facilitate their crossing into Niger. Often these people carried wrapped parcels containing hard drugs, which they handed over to militants on their arrival in Tongo Tongo.

“It was mostly cocaine,” said Moussa, who was born and raised in Tongo Tongo. “There was hardly a time I didn’t return [to the village] with a migrant carrying drugs.”

The migrants were mere beasts of burden, and not even what law enforcement officers call “mules” smuggling drugs through airports. The migrants themselves were being smuggled, the women among them often becoming de facto sex slaves. They just carried the dope for the jihadists’ convenience. But rarely has there been a more perfect example of the way terrorists and criminals blend together into one hybrid network.

Alain Bauer, one of the leading criminologists in France, has argued for years that recognizing this hybrid threat is key to crushing it, but most governments get lost in the categories they create, with some investigators deployed to chase terrorists, others running after drug smugglers, and still others looking into the question of human trafficking.

As Bauer likes to put it, “Intelligence is about how you stored information. If your storage system is not the right fit, the vital information gets lost, and the system actually works to suppress what doesn’t fit rather than creating a place for it.”

What’s striking about the network that weaves its way through Tongo Tongo, moreover, is the reach of the narcotics operations behind it. This hybrid brings together Colombia’s cartels and al Qaeda’s acolytes.

The drugs didn’t originate in Mali or anywhere else that ISIS militants operate in West Africa. They were brought from across the Atlantic into the tiny African nation of Guinea-Bissau by gangs operating from Latin America.

And this is not new.

Decades of political instability have contributed to high-level drug smuggling and lawlessness in Guinea-Bissau. An elected president has never stayed in office (PDF) until the end of his tenure. Three were overthrown and one was assassinated by soldiers. Three of the last five armed forces chiefs of staff were murdered and one was forced by a rival military officer to go on exile.

“When there is a problem in Guinea-Bissau, drug smuggling increases,” said Moussa, who now drives commercially between Nigeria and Niger.

A decade ago, the United Nations said Guinea-Bissau was becoming a narco-state, as its high-level corruption and a near-total absence of the rule of law allowed drug gangs to use the country as a base for smuggling huge amounts of South American cocaine to Europe.

Another U.N. report indicated that at least 50 tons of cocaine from the Andean countries were transiting Guinea-Bissau and other West African countries every year, heading north, where they were worth almost $2 billion on the streets of European cities.

In 2012, citing another investigation by the United Nations, Canada’s Globe and Mail newspaper said that about 50 Colombian “drug lords” were based in Guinea-Bissau, where they controlled the cocaine trade, transporting as much as 2,200 pounds of the substance into the country every night by air and more by sea.

Such numbers may be very highly exaggerated. The same article reported that “across the region, an estimated 50 tons of cocaine is transported through West Africa every year, mostly from Colombia and Venezuela.” That falls far short of the 365 metric tons implied by the amounts supposed to arrive nightly in Guinea-Bissau.

But whatever the precise number, the cocaine transhipment was, and remains, huge.

A number of the drug lords in Guinea-Bissau are known to have collaborated with armed groups in Latin America, including the Revolutionary Armed Forces of Colombia, or FARC, a group that, until its disarmament and reformation as a legal political party last year, was Colombia’s largest rebel group and designated a terrorist organization by the United States.

In November 2016, the Colombian government and FARC rebels signed a modified peace agreement that ended more than 50 years of conflict in the country. But not all members of FARC were in agreement, and another rebel group, the National Liberation Army (ELN), and some right-wing Colombian paramilitary groups have an interest in keeping the flourishing trade alive, not only with the United States, but with Europe, through Africa.

According to Moussa, the smuggler from Niger, agents from the “Islamic State in the Greater Sahara” operating in Guinea-Bissau often negotiated with South American drug cartels including, FARC front-men, in the capital, Bissau, exploring ways for the jihadist group to transport cocaine to Europe, the mode of payment for transportation, and what quantity of the substance the group can keep for itself.

Moussa says that a given group of ISGS militants would typically take cocaine from Bissau to Senegal, then had it over to a different group to take to Mali, then have migrants carry it into Niger.

Cash payment from the Latin American cartels to ISGS for transportation of cocaine is only made in full once the substance reaches its final destination in Europe. A part, though, is paid to cover logistics for movement through the sub-Saharan Africa and across the Mediterranean. The jihadists also get to keep a little portion of the drugs.

“The bigger the cocaine shipment, the bigger the portion the militants keep. It is big business for them,” said Moussa, who quit smuggling migrants for ISGS jihadists in Niger after they accused him of stealing cocaine.

The ISGS was not a widely known group, at least by its name, until the attacks on American and Nigérien soldiers last October. The group founder, Adnan al-Sahrawi, was a commander in al Qaeda in the Islamic Maghreb (AQIM), and was later among the jihadists that founded the Movement for Oneness and Jihad in West Africa (MUJWA), formed in 2011 as an offshoot of AQIM.

In August 2013, MUJWA merged with Mokhtar Belmokhtar’s al-Mulathameen group to form al-Mourabitoun, and Sahrawi became its overall head not long after. He later declared the group’s allegiance to ISIS, but fell out with Belmokhtar who maintained that al-Mourabitoun was allied to al Qaeda. Sahrawi then left to form ISGS.

(French criminologist Alain Bauer cited Belmokhtar as a classic case in point of hybrid terror-criminality in 2013: “Belmokhtar is 99 percent criminal and 1 percent jihadi,” said Bauer, noting that one of his activities, cigarette smuggling, had earned him the sobriquet “Mr. Marlboro.”)

Sahrawi, who now says he is loyal to ISIS, has been a drug kingpin since his time with Al Qaeda. The United Nations Office on Drugs and Crime (UNODC) revealed in its 2017 World Drug Report (PDF) that “individual commanders” of MUJWA, which Sahrawi helped found, “seem at present to be directly involved in drug trafficking.”

“He has been dealing with FARC since he was with al-Qaeda,” Moussa said of Sahrawi. “His followers boast about his record in drug trafficking.”

In December 2009, three Al Qaeda associates, Oumar Issa, Harouna Toure, and Idriss Abelrahman, were arrested in Ghana by the U.S. Drug Enforcement Administration (DEA) and flown to New York to face charges of conspiracy to commit acts of narco‑terrorism and conspiracy to provide material support to a foreign terrorist organization.

The DEA said the men “conspired to assist purported representatives of the FARC in transporting hundreds of kilograms of cocaine from West Africa through North Africa and ultimately into Spain.” The agency found that “in a series of telephone calls and meetings with two confidential sources working with the DEA who claimed to represent the FARC, the defendants stated that they had a transportation route from West Africa through North Africa, and that Al Qaeda could provide protection for the cocaine along that route.”

In 2011, the DEA arrested five people in Liberia (PDF) and charged them with narco-terrorism. They had agreed to store multi-ton shipments of heroin in Benin and then transport a portion of the drugs to Ghana for transfer via commercial airplane to the United States for distribution. The drugs were believed to be owned by the Taliban, which, like other Afghan groups, is heavily involved in the cultivation of opium and marketing of its derivatives.

Two years later, the Spanish news organization, Cadena Ser, reported that the DEA, in March 2013, arrested two Colombians—one of whom was a member of FARC—along with three members of AQIM in Algeria on drug trafficking charges. The Colombians were alleged to have delivered in the previous year a shipment of cocaine in exchange for cash, and arms acquired in Libya following the fall of Muammar Gaddafi. FARC collaborators negotiated with AQIM through a local jihadist group taking orders from the North African terror organization, according to the report.

“MUJWA was the main Al Qaeda affiliate that worked closely with drug cartels in Mali and Algeria, and you couldn’t mention the terror group without talking about Sahrawi,” Christian Anozie, editor of Event Diary International, a West African news publication, told The Daily Beast. “ISGS is mostly made up of fighters who worked under Sahrawi at MUJWA, and that is why most West African governments still refer to ISGS as MUJWA.”

Most of the big drug deals involving terrorist organizations are struck in Guinea-Bissau. The main destination of the drugs that leave the tropical country is often Western Europe, but some transactions have involved shipping cocaine to the United States.

In 2013, Antonio Injai, head of Guinea-Bissau’s armed forces, was indicted by a federal grand jury in New York on cocaine and weapons-trafficking charges. The military chief told informants for the DEA, who had posed as rebels with FARC, that he was willing to store tons of cocaine and ship it to the United States. Injai also agreed to buy weapons for FARC.

Two weeks before Injai’s indictment, his close ally and former chief of the Guinea-Bissau Navy, José Américo Bubo Na Tchuto, was indicted on similar drug charges after being arrested by DEA operatives in a sting operation off the coast of West Africa.

“Cocaine smuggling slowed down in Guinea-Bissau after Na Tchuto’s arrest, as traffickers were scared the Americans would target more drug dealers,” Anozie said. “But the drug trade picked up again, and has been helped by the political crisis that keeps rocking [Guinea-Bissau].”

The UNODC said last year (PDF) that international drug traffickers have for many years “counted on the support of influential segments within the political and military apparatus” in Guinea-Bissau to trade narcotics. These traffickers have targeted a small number of senior officials in the government, police, customs and judiciary “with bribes in exchange for either passive or active support facilitating illegal activities.”

The same report notes that Boko Haram reportedly has “helped drug traffickers to smuggle heroin and cocaine across West Africa.”

A report on narcotics smuggling in Guinea-Bissau published in the Guardianback in 2008 noted that the West African coast can be reached across the shortest transatlantic crossing from South America either by plane from Colombia (with a refuelling stop in Brazil), or by ship from Brazil or Venezuela.

The Guardian revealed that, at least in 2008, the boats departing South America traveled only by night and remain motionless by day, covered in blue tarpaulins to avoid detection from the air.

The drug barons and the jihadists are always finding ways to thwart their enemies, and in West Africa they have discovered the best way to do that is to work together.