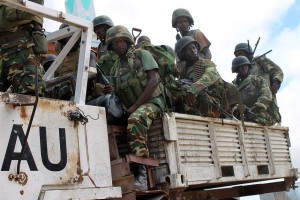 During his visit to Kenya on Monday, Kerry joined foreign ministers from Kenya, Somalia, South Sudan, Uganda, and Sudan to discuss the South Sudan crisis, after his talks with Kenyan President Uhuru Kenyatta.

At a joint conference with Kerry after the meeting, Kenyan foreign minister Amina Mohamed said chiefs of defence from the East African region were still discussing the modalities of the deployment the 4,000-strong protection force.

She however said the force, which would be part of the UN peacekeeping mission in South Sudan, should be deployed “sooner rather than later.”

The rival leaders had fought a civil war which erupted in December 2013. A peace agreement signed by them last August was supposed to end hostilities, but failed to quell the fresh clashes.

The East African bloc, the Inter-Governmental Authority on Development (IGAD), proposed the idea of the protection force last month following the renewed fighting in South Sudan, and the deployment has been authorized by the African Union (AU) and the UN Security Council.

Kerry said the protection force “is not an intervention force” and that its mandate would be to protect civilians from attacks and ensure “their access and freedom of movement.”

Kerry also announced “nearly 138 million (U.S.) dollars in new aid from the U.S. to people of South Sudan” — funds that will be used to provide food, water and medicine to those in need.

He urged South Sudan’s leaders to “live up to their responsibilities” and “refrain from violent and provocative acts”.

Kerry’s one-day visit to Kenya also focused on the situation in Somalia, where the Al-Shabaab Islamist group Al-Shabaab continues to stage attacks.

Kerry said the U.S. would work with regional countries to ensure the AU Mission in Somalia (AMISOM) have the resources it needed for the fight against Al-Shabaab militants, and vowed the U.S. support for the region in counter-terrorism efforts.