You are here: Home / Analysis / Afghans of Liwa Fatemiyoun Unit, set up by Iran’s Revolutionary Guards Corps in Syria 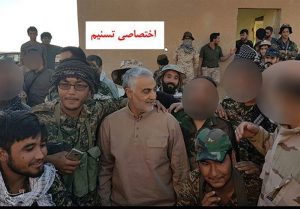 Saeed is the pseudonym of a 22-year-old Afghan who has been fighting in Syria for the last four years. He serves in the Armored Unit of the Liwa Fatemiyoun Unit, which was set up by Iran’s Revolutionary Guards Corps (IRGC), like reported by iranwire.com.

According to reports, throughout the war in Syria, IRGC has been drafting Shia Afghan immigrants in Iran to fight with the unit, deploying them to various combat zones across Syria.

Many Afghan refugees looking for a citizenship status or financial benefits have joined the army, so I asked Saeed how he ended up in Fatemiyoun. “I had heard about a small group called ISIS who were committing horrible crimes in the name of Islam,” Saeed told me. “I saw some of those horrible video clips of [ISIS] decapitating human beings and killing innocent children, which really bothered me. At first, I didn’t even know where Syria was on the map, but after more research and watching a documentary on TV, I was certain that I must go to war against these people. Finally, I found a phone number of a person in charge of Fatemiyoun recruitment and contacted him.”

After meeting with the recruitment agent, Saeed found out that he needed to fill out official paperwork in order to join the corps, for which he needed references. He also had to hire a lawyer and agree to sign away his rights and protection so that the IRGC would not be held responsible in case anything bad happened to him. “What they mean by references and lawyer is people you know. It’s even better for them to be friends and family members because if you have no one, you can’t join Fatemiyoun. These are the people who will receive your body and belongings after your death, and who are entitled to your martyrdom benefits.”

After thinking it over for a night, Saeed joined the force the next day. Afterward, he was promised a pilgrimage to the holy shrines in Syria and 15 million Iranian rials (US$350 at the time of publishing) as a monthly salary. “At first I thought this would be a good opportunity to see some new places and visit the holy shrines. But after getting there I completely changed my mind and decided to stay.”

A few days after the registration, Saeed went to a boot camp for military and combat training. He did not provide any detail about the whereabouts of the camps but he did give other information. “In an intensive course [lasting] 20 days, we learned how to work with different weapons, from heavy automatic rifles to handguns. We also learned about the military tactics and strategies that could be useful in our situation.” After training, Saeed and his fellow soldiers were deployed to Syria, flying into Damascus. At the time, there was a huge battle near the shrine of Hazrat Zainab — the daughter of the third Shia Imam — and ISIS was bombing the shrine. “The airport and the surrounding area was under Fatemiyoun control,” Saeed said.

His training continued for 10 more days, during which he learned how to work with T-72 tanks. “At first, I served as a tank rocket launcher in Liwa Fatemiyoun,” he told me.

Some people have said that the Afghan soldiers join Fatemiyoun because of financial needs and the benefits offered by the Iranian government, but Saeed told me religious beliefs were also an important factor. He wanted to guard the holy shrines and fight against the cruelty of ISIS.

“These two are mutually dependent. If I came here to fight against ISIS because of my beliefs, there should be someone at home to take care of my family’s financial needs. As you might know, most of the Fatemiyoun fighters are the men in their families and need to financially support them. But If I only considered the financial benefits, you might not know, but ISIS pays its fighters more. So, as you can see these two are mutually dependent.”

According to some reports, the Iranian government forces young Afghan immigrants who took refuge in the country to fight in Syria. But Saeed says he was not forced join, and he was not influenced by propaganda. “If that was the case, maybe a 1,000 people would get fooled and join the corps, but Fatemiyoun has more than 30,000 soldiers who all are very well informed and educated,” he said.

In fact, he says the government told him from the very beginning that there was a high chance of him getting killed in the war. They would only recruit him if he willingly accepted the danger, and if he failed to do so, he should forget about joining the Fatemiyoun brigade, he said.

“The establishment of Fatemiyoun changed the Iranian view of Afghan immigrants for the better and caused them to treat them with respect and less harassment,” Saeed said. “Our victories in Syria even made us popular in Iranian society, which is the greatest achievement for Afghan immigrants.”

No Chance to Defend at Home

But what do Afghan people think about their fellow Afghans joining Fatemiyoun? As Saeed admits, most Afghans do not have a positive opinion on the issue. They criticize Fatemiyoun soldiers and want to know why they didn’t join their own national army instead of the Fatemiyoun Brigade. “We hear this a lot — why don’t you defend your own country? I tell them you need to first establish an organized and efficient army, then ask us to join it,” says Saeed. “When there is not such an organized army in Afghanistan, where can we serve? Iran is organized and using our help, why won’t you?”

Saeed has gained significant military and combat experience and says there are no Afghan or Iranian commandos who have the same level of experience as he does, since he learned everything first hand and during the course of actual combat.

In 2017, the Taliban attacked the largely Shia town of Mirzawalang in northern Afghanistan and murdered many of the locals. At the time, Saeed was in Kabul on a short period of leave. He along with some of his friends decided to join the Afghan army and fight against the Taliban in Mirzawalang, but the Afghan government did not let them.

Saeed says as soon as the Afghan government gives the green light, he is ready to join the national army and fight against terrorist groups, and to share his experience with Afghan soldiers.

And yet, like many other young Afghans, Saeed dreams of a peaceful and prosperous Afghanistan: “My goal is to use my experience and expertise for the safety and peace of my own people and country if the government allows. We want our people to help us come back and serve our own country. The Syrian war is over. But I don’t want Iran to intervene in the politics of Afghanistan.” He says the country has suffered enough from foreign intervention over the decades.