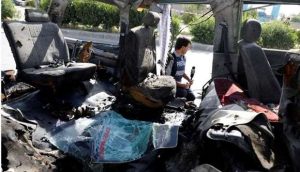 At least 11 civilians, including four women and three children, were killed when a roadside bomb struck a bus in Afghanistan, officials said on Sunday, as top US negotiator Zalmay Khalilzad visited Kabul.

The latest attack occurred on Saturday evening in the western province of Badghis, raising fears of fresh violence in the months ahead as the US military continues to pull out its last remaining troops from the country.

According to AFP, no group has claimed responsibility for the blast. But Badghis governor Hessamuddin Shams accused the Taliban of planting the bomb.

Another official from the province, Khodadad Tayeb, confirmed the toll and said that the bus fell into a valley after it was hit by the bomb.

According to AP, rescuers were still searching for bodies in the valley.

Large swathes of war-ravaged Afghanistan are littered with bombs and land mines. Many were planted by insurgents to target government military convoys, but they often kill civilians instead.

The United Nations has repeatedly demanded both government forces and the Taliban take more precautions to protect civilians.

In the first three months of this year, the UN mission in Afghanistan said that 1,783 civilians had been killed or wounded in Afghanistan, an increase of 29 per cent over the same period last year.

Saturday’s attack came after a series of blasts targeted passenger buses in Kabul this week, two of them on Thursday in areas largely dominated by the Shia Hazara community.

Afghanistan’s Hazaras are often the target of brutal jihadist attacks usually claimed by the militant Islamic State group. Hours after Thursday’s attack activists launched a campaign on Twitter under the hashtag “stopHazaraGenocide”.