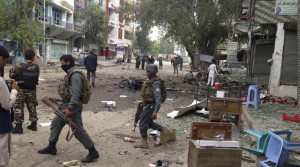 More than 100 people have been killed in a weekend of attacks in Afghanistan.

Khan Abad district administrative chief Heyatullah Amiri said yesterday that 29 people had been killed by a lone suicide bomber on foot at a meeting of illegal armed groups.

Mr Amiri said that four of the dead were leaders of the criminal groups, while four others were innocent bystanders. Another 19 people were reportedly wounded, 15 of them civilians.

Taliban spokesman Zabihullah Mujahid claimed responsibility for the attack in an email sent to media.

On Friday at least 44 people were killed and more than 300 injured in three attacks in the capital Kabul.

The UN assistance mission in Afghanistan said it was the highest daily death toll since it began keeping records in 2009, eight years after the US-led invasion and occupation.

In one attack, a massive truck bombing targeted a residential area in Kabul that killed 15 people and wounded more than 200.

Elsewhere a suicide bomber attacked recruits outside a police academy, killing at least 20 cadets and wounding 24.

And an attack on the Nato base near Kabul’s international airport killed one US soldier and wounded eight Afghan security guards and several other US personnel. Three insurgents were also killed.

In eastern Nangarhar province, a drone strike carried out by Afghan forces killed 15 insurgents and wounded nine others on Saturday, while another strike killed at least 10.