You are here: Home / West Asia / Afghanistan: US forces’ convoy comes under suicide attacked in Logar 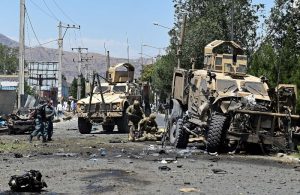 A convoy of US forces came under suicide attack in Pul-i-Alam, the capital of central Logar province, an official said according to pajhwok.com.

The vehicle in the convoy was partially damaged as a result of the attack, Arab said, adding he had no information about casualties.

Haseeb Stanikzai, the provincial council head, confirmed the assault, saying the US forces were on the way back to their base after conducting an operation in Mohammad Agha district.

He said five people including a women and children were killed in the attack. Stankizai had no information about US forces’ casualties.

Lt. Col. Martin O’ Donnell, spokesman for US forces in Afghanistan, acknowledged a mounted patrol in Logar was attacked by a vehicle-borne suicide bomber.

He said the attack caused no casualties; only minor damage was done to a vehicle. “We cannot confirm the casualties of Afghan officials, civilians, women and children.”

“If true, our thoughts go out to the families of the innocent, who continue to suffer needlessly from the Taliban‘s violence and their refusal to listen to the call of the Afghan people and take the courageous step towards long-lasting peace.”