You are here: Home / West Asia / Afghanistan: top Taliban commander killed with his 27 men in Kunduz 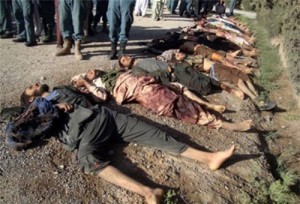 A prominent Taliban commander was killed following a military operation by the Afghan security forces in northern Kunduz province of Afghanistan, wrote Khaama.

The operation was conducted late on Monday night in Imam Sahib district, spokesman for the Ministry of Interior, Sediq Sediqi said.

He said at least 27 militants were also injured during the operation along with the prominent Taliban commander who was identified as Mullah Mustafa.

The death of Mullah Mustafa is considered a major blow to the anti-government armed militants who are currently engaged in a fierge gun battle with the Afghan security forces in a number of districts of Kunduz province.