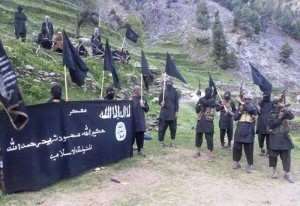 A top leader of the loyalists of Islamic State of Iraq and Syria (ISIS) terrorist group was killed along with at least 43 other militants in eastern Nangarhar province of Afghanistan.

The Ministry of Defense (MoD) said the militants were killed during the joint military operations conducted by the Afghan National Defense and Security Forces.

MoD further added that the operations were conducted in Pacher Agam district of Nangarhar and Deh Bala.

According to MoD, a shadow judge of the terror group was among those killed and has been identified as Muftauddin.

In the meantime, the provincial police commandment, said over 30 militants of the terror group were killed and several weapons and ammunition were destroyed.

The loyalists of the Islamic State of Iraq and Syria (ISIS) terrorist group have not commented regarding the report so far.

The ISIS loyalists have been attempting to gain foothold in the strategic Pacher Agam district in a bid to expand their presence and operations in this province.

The deputy house speaker of the Afghan parliament Zahir Qadir earlier  warned that the loyalists of the terror group are attempting to establish the Khurasan Caliphate in Afghanistan and are busy expanding their presence in some of the difficult terrains of the country.

Speaking during a session of the parliament late last month, Qadir warned that the group will become successful in establishing the caliphate if they managed to seize control of Tora Bora in Nangarhar.

He said the loyalists of the terror group have managed to take control of a strategic area in Pacher Agam district.

According to Qadir, the area is a few hundred meters away from Tora Bora and the loyalists of the terror group will become successful if their attempts if they managed to expand foothold in Tora Bora.