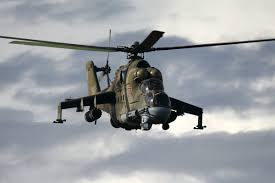 Afghanistan is poised to acquire four attack helicopters from India to help it fight a growing Taliban insurgency, a small but significant deal marking a shift in Kabul’s search for allies that is likely to anger Pakistan.

Soon after he took over, Afghan President Ashraf Ghani held off military assistance from India while he courted Pakistan’s political and military leadership to end years of mutual hostility and steer the Taliban, many of who live in Pakistan, toward negotiations.

But a wave of bombings in Kabul that Ghani said were plotted in Pakistan, followed by the Taliban encircling major cities including briefly taking over Kunduz in the north, has prompted a scramble to shore up support in the region.

Afghan National Security Adviser Mohammad Hanif Atmar is due in New Delhi this weekend to finalise the transfer of the Russian-made Mi-25 helicopters, said sources in New Delhi and Kabul who are involved in the plans.

Afghan forces badly need air power to reverse gains by the Taliban and in particular helicopter gunships that have range as well as firepower, the officials said.

While the United States has agreed to supply Afghan forces with light McDonnell Douglas MD 530 helicopters, which can be fitted with weapons, many Afghan officers prefer the bigger, sturdier Russian machines.