You are here: Home / West Asia / Afghanistan: the next proxy battleground with Iran and Russia 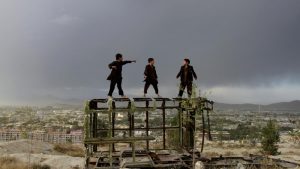 The debate over the future of Washington’s posture towards Tehran has revolved around three basic nuclear options: legitimation of the deal; decertify, waive, and replace; or outright repeal. It has reached a fever pitch as the Trump administration completed its long-awaited Iran policy review, like reported by thehill.com.

But beyond the headlines, lurks a menacing trend line that is making global hot spots — like Afghanistan — hotter. The unholy alliance between Russia and Iran in the graveyard of empires continues to look for trouble in all the wrong places, seeking to be both firefighters and arsonists at the same time. Without a comprehensive strategy that addresses this new axis of instability, Afghanistan’s fires will grow even worse.

Afghanistan — the playground of empires?

In Afghanistan — America’s longest war — the latest quarterly report from the Special Inspector General for Afghanistan Reconstruction paints a worrisome picture: As of May 2017, 11.1 percent of the country’s districts remain under militant control — a more than two percentage-point increase from the same period in 2016.

Amid this deteriorating security landscape, the Kremlin and Tehran would have you believe they are at the forefront of combatting extremism.  Moscow has all but admitted that it shares intelligence with the Taliban — but that it does so to combat the Islamic State and that it remains committed to a peace process.  Ditto for Iran, who recently offered its peacemaking services.

But Russia and Iran have been playing a double game.  According to news reports, U.S. officials have described intelligence showing that Russia was providing cash and arms to the Taliban, specifically machine guns — a trend that has accelerated over the past 18 months as of this spring. Secretary of Defense Jim Mattis publicly rebuked this pipeline during his visit to Afghanistan in October.

Then there are the flood of accounts from Afghan officials in the field: a district governor in Kunduz province who claims that small arms, rocket launchers, cash, and ammunition are making its way to the Taliban from Russia via Tajikistan; allegations that Putin provided the Taliban with a mobile clinic and medicine to treat injured Taliban fighters in Helmand province — which the internationally-recognized Ghani government is fiercely contesting; and that Russian military advisors have arrived in the northern province of Baghlan to support the Taliban.

Tehran isn’t a mere bystander either: The mullahcracy has systematically undermined the Ghani administration. In January, Afghan provincial officials accused Iran of thwarting state water and power projects — using the Taliban as a proxy. According to the governor of Helmand province, the Islamic Revolutionary Guard Corps (IRGC) provided advanced weapons — like mortar missiles — to the Taliban to attack government infrastructure in order to divert water resources from the Helmand River for its own benefit.

Despite the mounting evidence of Russia and Iran being agents of destabilization, their role has been conspicuously absent in the Trump administration’s articulation of the way forward in Afghanistan.

In his August speech outlining the need for a troop increase, President Trump never named and shamed despite calling on the Afghan government to “carry their share of the military, political, and economic burden.” And in his remarks on Friday on containing Iran, Afghanistan and the Taliban were only briefly mentioned.

How can President Ghani deliver when his own government is being delegitimized by foreign forces? This omission also comes notwithstanding President Trump’s concern over the “20 U.S.-designated foreign terrorist organizations are active in Afghanistan and Pakistan — the highest concentration in any region anywhere in the world.” Iran and Russia are legitimizing and strengthening at least one of them.

So what to do?

First, the Trump administration would be wise to adopt a “fighting then talking” strategy to pursue additional leverage on the stalemated battlefield before a peace process advances. The Iranians and Russians appear to be pursuing a parallel strategy: there are accounts from senior Afghan officials that the Kremlin is supporting the Taliban, using Iran as a cutout to extend its influence over eventual peace negotiations.  Putin and the supreme leader are rapidly creating facts on the ground — enabling Taliban advances — with money, materiel, and manpower.  The new U.S. troop deployments are a step in the right direction.

Second, Washington needs to use its influence, security and economic assistance, over the Ghani administration to enhance economic development within Afghanistan’s deeply impoverished Shia communities.

According to the World Bank, 39 percent of Afghans live in poverty; around 70 percent of the working-age population is illiterate; and the youth unemployment stands at 28 percent. The State Department wrote in 2016, “(s)ocietal discrimination against Shia Hazaras continued along class, race, and religious lines in the form of extortion of money through illegal taxation, forced recruitment and forced labor, physical abuse, and detention.”

Such disenfranchisement makes the Shia of Afghanistan susceptible to Iranian influence — thousands have been recruited by Iran to fight in Syria, with the promise of housing, a monthly salary of $600, and even the possibility of employment in Iran after completion of their mission. Ghani’s coalition desperately needs to be seen as a more viable alternative.

Lastly, President Trump needs to come to the realization that Russia is a geopolitical adversary, rather than partner, throughout the world. The Kremlin is using a similar playbook in Afghanistan as it has in Syria.  In Damascus, its rhetoric portrays a counterterrorism mission against ISIS, but the reality is far different in its coddling of the bloodstained regime of Bashar al-Assad.  In Kabul, Moscow boasts of its role as a peacemaker, but accounts portray it as a continued troublemaker.

Appropriately challenging — rather than accommodating — Russia on the international stage remains paramount.