You are here: Home / West Asia / Afghanistan: terrorists’ elimination strategy to be implemented in the wake of Donald Trump evaluation 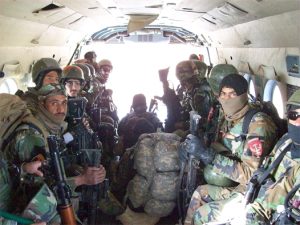 Afghanistan has never supported terrorism. Those who spread terror and fear and kill innocent people, are indeed enemies of Islam and human being.  CE of the NUG Dr. Abdullah said that Afghanistan has never supported  terrorists and  the goal behind all allegations on  Afghanistan support of terrorists groups are merely for misleading of people mentality and  don’t help current situation, like reported by thekabultimes.gov.af.

Prime Minister of  Pakistan Nawaz Sharif has  recently said that Afghanistan soil has been used  against Pakistan but CE Abdullah who was  addressing assassination anniversary of Hezb-e-Wahdat former  leader Abdul Ali Mazari, said that instead of accusing, sincere counter terror cooperation should be offered in war on terror for elimination of  this phenomenon.

Terrorist activities are acceptable to nobody. So the world community should make terror supporting countries to give up terror support and don’t let this inauspicious  war to put step on  the throat of Afghans and regional people.

Daesh and Al-Qaeda elimination strategy is expected to be shared with the US president Donald Trump in near future and be implement after Trump’s assessment.  American chcief of joint staff, Gen. Joseph  Danford has  said that the US forces would concentrate in war  on terror according to this strategy and would  intensify their  fighting to that extent that put an end  to terror phenomenon.

All  details of this strategy have not been released yet, but it has been said that steps are included in this strategy against those countries who support, train and  equip terrorists  and  send  them  to regional and  other  countries  to  carryout subversive activities.

Terror, fear, killing, destruction and devastation is  not the business of  mankind but  disguised people  commit this work. So, in  border  to prevent harming  of  mankind’s personality and identity, the Afghans expect that decisive steps would be taken for elimination of  terrorists and  mankind be  rescued from this uncertain war.

Peace  and  stability is the  need  of  all people particularly the Afghans who have been fed up more  from this nasty war.

Only that time Afghanistan and the region would achieve reliable peace and stability that those diabolical countries who launch hue  and cry in  meetings and  conferences  but  in  action support terrorists, would refrain from their double game.

President  Mohammad Ashraf Ghani has time  and  again said  that  there  is  serious  need  of regional countries  sincere cooperation for  implementation of  peace and stability and void of these countries  cooperation,  achieving peace would be a dream.

Why these countries don’t sincerely cooperate in war on terror, is a confusing question to majority of Afghans.

But  it is said  that these  countries receive privileges in  one  hand and launch competitions  and  want to damage their  rival countries on the other,  but it is  not  a solution to this problem.

The Afghan MoFA has announced that it is ready to help Pakistan but on the condition of  mutual contribution of Pakistan government for arrest of wanted  terrorists.