You are here: Home / West Asia / Afghanistan: terror alert in Kabul and other cities 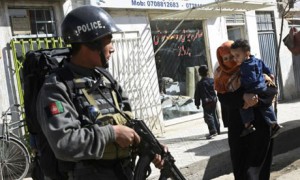 The Afghan authorities issued today a terror alert decree for the capital and the northern city of Mazar-e-Sharif, after an escalation of attacks causing nine dead and 45 wounded.

Sediqi said they will use all the resources available to prevent actions like yesterday’s two, that left four dead, including two suicide bombers, and 36 wounded near the Kabul International Airport.

In the Balkh province, there is also an order of alert and increased security measures after the attack on Sunday against the Indian consulate in Mazar-e-Sharif, the provincial capital.

Over the past year, the country experienced one of the bloodiest periods since the invasion and occupation of the country in 2001 by an international force, with a death toll of nearly 1,600 deceased, and 3,329 wounded.