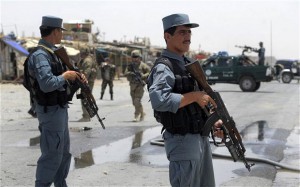 An Afghan official says a suicide bomber exploded a truck loaded with explosives outside provincial government offices in the country’s east, killing eight people and wounding another 12.

Din Mohammad Darwish, spokesman for the governor of Logar province, near Kabul, says the dead from Thursday’s attack include three police officers and five civilians. Five police are among the wounded.

The massive blast, in provincial capital Puli Alam, blew out windows in buildings 500 meters (1,600 feet) away.

The Taliban claimed responsibility for the attack in a statement, saying the targets were military and paramilitary units.

The Taliban insurgency is currently in turmoil, following confirmation of the death of its leader, Mullah Mohammad Omar. Afghan authorities say he died in a Pakistani hospital more than two years ago.