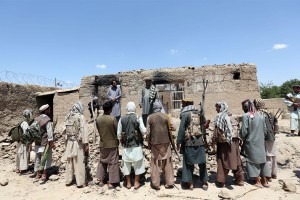 Taliban insurgents reportedly seized control of as many as 80 villages on Monday night in northern Kunduz province, local officials said on Tuesday.

The incident took place after Taliban insurgents attacked Khan Abad district of the province two days ago and started clashes with residents in the district. The residents are fighting the insurgents, head of provincial council of Kunduz, Mohammad Yousuf Ayoubi said.

“The Taliban last night took control of as many as 80 villages and about 14 residents who are fighting the insurgents have been killed or injured so far,” he said.

The attack has resulted in hundreds of families fleeing their homes, he added.

However, security officials have not yet commented over the incident.

A number of key districts fell into Taliban hands over the past few months, but have been retaken by security forces.‎