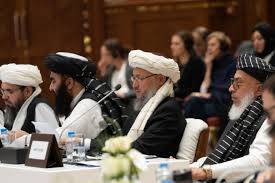 Taliban peace negotiators emphasized once again on their stance for an Islamic governing system and rejected a system based on democracy which is the top demand of Afghan team, like reported by menafn.com.

Mohammad Naeem, Taliban’s political spokesman, claimed that Islamic and democratic systems are in contrast in Afghanistan.

Naeem also rejected reports on an interim administration to replace President Ghani, saying neither them nor the government of Afghanistan offered such demand in the first round of talks.

‘Islam in fact is in contrast with democracy and a governing system cannot be based on both of them,’ Naeem said.

‘We want an Islamic system and will discuss how to reach this system and how to establish it on the negotiation table and we want to reach an agreement on it.’

An Afghan negotiator Amin Ahmadi had earlier said that Taliban emphasize on the governing system and think human rights, women’s rights and the Constitution have no place in Islamic framework.