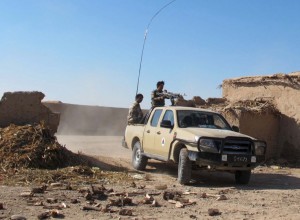 In a throwback to the September Kunduz siege, Taliban militants and Afghan security forces are engaged in intense fighting in Helmand province after the insurgents mounted high-profile attacks against government targets. The Islamists have captured government buildings including the police headquarters in Sangin district in Helmand.

Local reports suggest government forces in Sangin have begun to pull back after they were overrun by the Taliban. At least 150 police officers have reportedly fled the city to the outskirts fearing for their lives.

The fighting broke out in Helmand hours after the province’s Deputy Governor, Mohammad Jan Rasoolyar, warned the region was on the verge of falling into Taliban hands. In a Facebook post directed at Afghan President Ashraf Ghani, Rasoolyar wrote: “I know that bringing up this issue on social media will make you very angry. But I cannot be silent any more … as Helmand stands on the brink. Ninety men have been killed in Gereshk and Sangin districts in the last two days.”

Officials in the districts, who claimed about 90 Taliban extremists were killed in the clashes, have asked for reinforcements from the Kabul administration as they are running out of weapons.

“Our units do not have sufficient weapons like AK-47s; if weapons are provided, security will be maintained,” said Mohammad Sharif, governor of Greshk district.

Police chief Mohammad Ismail echoed similar concerns adding: “The enemy extended threats on us following the fall of Nawzad, Musa Qala and Sangeen districts, then we conducted a tactical retreat to secure Greshk.”

The federal administration in Kabul has denied the deaths of 90 security personnel but did not offer any information on the Helmand unrest. The presidential office has also not responded to Rasoolyar’s request.

The security situation in Helmand is much similar to Kunduz, which was seized by the Islamists when they launched a massive armed operation in September. Concerns were raised over the Kunduz capture, though brief, as the militants were able to get hold of a large cache of weapons from seized buildings. Local reports had said the Taliban took away both heavy and light weapons from the security forces in late September and early October emboldening them to launch further assaults. Officials assert the weapons have already found their way to battle-fields.