You are here: Home / West Asia / Afghanistan: Taliban kills 7 soldiers in attack on military base in Farah 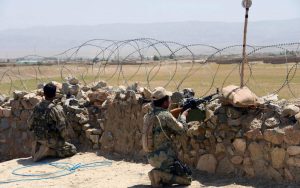 At least 7 Afghan soldiers were shot dead in a Taliban attack on an army base in Farah province, local officials said to ariananews.af.

The Farah provincial council head, FaridBakhtawar has confirmed the incident and said the army base has been collapsed to Taliban and two other soldiers were also wounded in the attack.

A source on condition of anonymity added that the Taliban group also suffered heavy casualties in the incident.

Afghan forces have struggled to combat a resurgent Taliban since U.S. and NATO forces formally concluded their combat mission at the end of 2014, switching to a counter-terrorism and support role.

The Taliban unleashed a wave of attacks across Afghanistan, targeting police compounds and government facilities with suicide bombers in the country’s south, east and west.