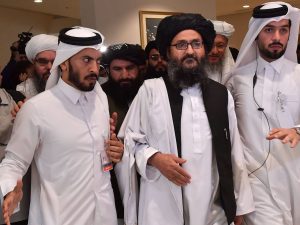 The Afghan Taliban have kept up a close relationship with Al Qaeda despite having pledged to stop cooperating with terrorist groups, permitting the militants to conduct training in Afghanistan and deploy fighters alongside its forces, according to the head of a U.N. panel monitoring the insurgency, like reported by nbcnews.com.

The Taliban’s association with Al Qaeda has continued even though the insurgency signed an agreement with the U.S. a year ago that bans cooperation with or hosting of terrorist groups — and despite a public statement by Trump administration Secretary of State Mike Pompeo that the Taliban had “made the break” with terrorist groups.

“There is still clearly a close relationship between Al Qaeda and the Taliban,” said Edmund Fitton-Brown, the coordinator of the U.N. panel responsible for tracking the Taliban and terrorist groups in Afghanistan. The reports of the U.N. Analytical Support and Sanctions Monitoring Team are based in part on information shared by foreign governments’ intelligence services.

“We believe that the top leadership of Al Qaeda is still under Taliban protection,” he said.

According to the U.N. monitoring team’s last report in January, there are 200 to 500 Al Qaeda fighters across about 11 Afghan provinces. Experts say untangling two groups that have lived and fought alongside each other for decades — and have even intermarried — will be difficult.

The Taliban’s long-established alliance with Al Qaeda will be on the agenda when NATO defense ministers meet Wednesday and Thursday to weigh a May deadline for a troop withdrawal as required by the U.S.-Taliban deal. European allies will look to President Joe Biden’s defense secretary, Lloyd Austin, for signals about the administration’s plans and how it intends to ensure that the insurgency lives up to the deal.

NATO Secretary-General Jens Stoltenberg said Monday that the Taliban needed to make good on its commitments under the 2020 agreement to open the way for a full withdrawal of foreign troops.

“We see that there is still a need for the Taliban to do more when it comes to delivering on their commitments … to make sure that they break all ties with international terrorists,” Stoltenberg said.

The U.S. has about 2,500 troops in Afghanistan, and its NATO-led partners have 9,600 troops on the ground. Under the terms of the 2020 deal, the U.S. pledged to pull out its remaining forces by May. But the Biden administration has said that it has not made any decision about troop levels and that officials are evaluating whether the Taliban have fulfilled their commitments.

U.S. intelligence officials said Al Qaeda and other terrorist groups remain active threats inside Afghanistan. But they declined to comment about the Taliban’s relationship with Al Qaeda.

The Taliban insist that they are abiding by the accord with the U.S., in which they agreed to enter into peace talks with their foes in the Afghan government in return for a withdrawal of U.S. and other NATO troops.

The agreement requires the Taliban to “send a clear message” that those who pose a threat to the security of the U.S. and its allies have no place in Afghanistan, and it prohibits cooperation with groups that threaten the security of the U.S. The Taliban are obliged to prevent terrorist groups from “recruiting, training, and fundraising,” and the insurgents are banned from hosting such groups.

The Taliban contend that there are no foreign fighters in Afghanistan and that members of Al Qaeda fled the country after the Sept. 11, 2001, terrorist attacks and the subsequent U.S.-led intervention. Foreign governments and regional analysts reject the claim as patently false.

Al Qaeda conducts training in Taliban-controlled areas, although there is no clear evidence of major recruitment or fundraising efforts, Fitton-Brown said.

“We understand that they do deploy alongside Taliban troops in certain theaters. Whether they make any decisive difference in those theaters, I could not assess,” Fitton-Brown said.

There are both working-level contacts and senior-level contacts between the Taliban and Al Qaeda, and the insurgency regularly seeks to reassure Al Qaeda that it will remain loyal to the militants, he said. The U.S.-Taliban negotiations in 2019 caused anxiety within Al Qaeda that the Afghan insurgents were ready to abandon it, leading to some tense discussions, the U.N. panel reported last year.

Al Qaeda is a smaller group with fewer resources, dependent on its hosts to provide an umbrella of protection and under persistent pressure from the U.S. and Western governments. It is clearly the weaker partner in the relationship, Fitton-Brown said.

“You can see that the account is very much in the Taliban’s favor. They’re the ones who are providing almost all of the favors. They’re much, much the stronger group. Al Qaeda need the Taliban much more than the Taliban need Al Qaeda,” Fitton-Brown said.

Yet the Taliban leadership has appeared reluctant to enter into a confrontation with Al Qaeda that could cause resentment within the insurgency, he said.

“There’s a strong impulse for the Taliban top leadership, for as long as they can, to hold people together on this. In other words, not to go down a track that would be distasteful or divisive to some potentially rebellious elements within the Taliban,” he said.

The Taliban, who are hedging their bets when it comes to Al Qaeda, can curtail their relationship with the group if they choose to, he said.

On March 1, Secretary of State Mike Pompeo said the Taliban “have now made the break” with terrorist groups and “agreed that they would break that relationship and that they would work alongside of us to destroy, deny resources to and have Al Qaeda depart from that place.”

“Any expectation that the Taliban’s leadership can dictate their fighters’ division from Al Qaeda dismisses cultural and practical realities,” said Douglas London, who served for more than 30 years in the CIA’s clandestine service and has experience in South and Central Asia.

By design, Al Qaeda trainers, fighters and leaders have built intimate, local ties to their Taliban counterparts, and the two organizations have forged familial ties that assure mutual loyalty and obligation based on Pashtun cultural norms, said London, author of the forthcoming book “The Recruiter: Spying and the Lost Art of American Intelligence.”

“Even if Taliban leaders want to turn the page on Al Qaeda, and my experience managing CIA’s counterterrorist operations in the region suggests they don’t, it would be a practical impossibility to expect Taliban fighters to abandon daughters, grandchildren and son-in-laws,” said London, a nonresident scholar at the Middle East Institute think tank.

“Now, 30 years in, some second-generation children from these marriages have themselves assumed positions in both Al Qaeda and the Taliban,” he said.