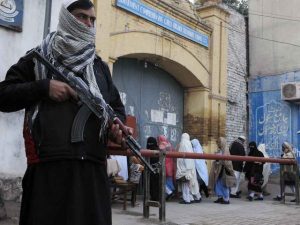 The Taliban has closed at least 30 schools in an area under its control south of Kabul after a local militant commander was killed by government forces, Afghan officials say to rferl.org.

Salim Saleh, a spokesman for Logar Province’s governor, said on April 6 that the Taliban closed the schools in the province’s Charkh district after several militants and one of their commanders were killed in a night raid by government forces earlier this week.

Afghan media earlier reported that Mualvi Mohammad, a Taliban commander, was killed in the Afghan National Army operation in the area late on March 30.

Saleh said the Taliban move had left some 12,000 students out of school in Charkh, which is about 60 kilometers south of the Afghan capital.

Saleh said that the authorities were in contact with influential tribal elders and religious scholars in the area in an attempt to secure the schools’ reopening in the coming days.

Hasibullah Stanekzai, the head of the Logar Provincial Council, said that the militants had warned Charkh elders to avoid meeting government officials to discuss reopening schools.

The schools have been closed since March 31.