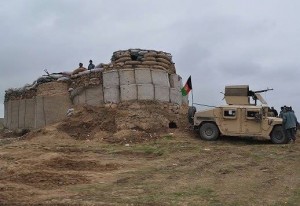 Haji Abdullah Khan, governor of Gizab District said after about two weeks of heavy clashes Taliban seized 12 security posts from security forces and now they are heading towards the district center.

He said that Taliban are about two kilometers away from the district center.

About the possible casualties in the clashes, Khan said that 12 militants have been killed and four soldiers embraced martyred so far.

Khan added that the security forces in Gizab have been overpowered by Taliban and if they do not receive immediate support the district may fall into the hands of Taliban.

But Colonel Rahimullah Khan the deputy police chief of Urozgan province said that security forces had tactically stepped back from some points.

He said that because of the blockage of roads leading to Gizab District they have asked air force and special force to assist in the situation.

The fighting continued by the time this report was filed.