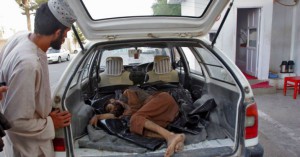 A roadside bomb killed at least 19 Afghan civilians including nine children in a southern province, while Taliban fighters in the north captured a key district on the frontline of the battle for Kunduz city, officials said on Sunday.

Violence has spiralled in Afghanistan since the departure of most foreign forces at the end of last year. Insurgents are pushing to take territory from the NATO-trained Afghan security forces more than 13 years after the U.S.-led military intervention that toppled the Taliban from power.

In the southern province of Helmand, police official Haji Janan Aqa said 19 people, including nine children and eight women, were killed on Saturday night. He said five people were wounded.

He said the villagers had recently fled fighting in Marjah district and were apparently trying to go home.

“They wanted to return to their village, but their van hit a roadside bomb planted by Taliban,” Aqa said.

A Reuters witness said all of the dead children he saw at the scene were under the age of five.

No one has claimed responsibility for the bombing. The Taliban typically deny targeting civilians, although their tactic of planting roadside bombs has been harshly criticised by the United Nations.

Heavy fighting was ongoing on Sunday just three kilometres away from the governor’s compound, said Hamdullah Danishi, a deputy governor of the province.

Security officials held a meeting early on Sunday to plan a counter-offensive.

“Today we will take Chardara district back and you will witness this,” Danishi said.

He also said 24 police and army soldiers were killed, 19 wounded and 25 captured. Mujahid said two of their fighters were killed and four wounded.

Danishi, however, said the government forces evacuated Chardara without any casualties. Both sides in the intensifying war downplay their own losses and exaggerate their enemies’ casualties.

If the city centre of Kunduz were to fall, it would be a major embarrassment to Afghan forces fighting this year mostly without U.S. support.

Although American advisers and Afghan officials say Taliban rarely hold territory for long, the surge in violence and aggressive offensives around the country have rattled confidence in the U.S.-backed government.