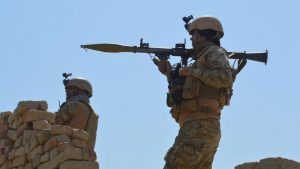 The Taliban launched a multi-pronged attack on a district headquarters in a remote district in northern Afghanistan early on Tuesday, killing at least 11 policemen and triggering a gunbattle that was still under way hours later, officials said according to trtworld.com.

The attack on the Shortepa district headquarters in northern Balkh province started early in the morning, according to Munir Ahmad Farhad, spokesman for the provincial governor.

Farhad denied the claim, saying Afghan security forces were still in control of the district headquarters and that reinforcements were on their way to Shortepa.

The district is very remote, said Mohammad Afzel Hadid, head of the Balkh provincial council, adding that he fears the casualty toll could rise further unless reinforcement arrives promptly.

“I hope reinforcements arrive sooner rather than later, it is a remote area with very poor communications,” he said.

Taliban attacks have continued unabated even as Afghanistan held presidential elections on Saturday and the US-Taliban talks over a peace deal collapsed last month.

There were at least 68 attacks by the Taliban across the country during election day, most of them rockets fired from distant outposts.

At least five people were killed, including one policeman, and scores more were wounded.

Despite upgraded security, authorities said 431 polling stations stayed closed because it was impossible to guarantee their security since they were either in areas under Taliban control or in places where insurgents could threaten nearby villages.

Results of the vote are not due for weeks.

The Taliban control or hold sway over roughly half the country now and they had warned voters not to participate in the election.