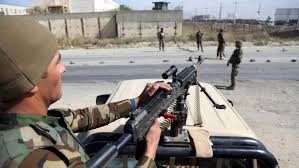 The Taliban targeted a pro-government militia compound in northern Afghanistan before dawn on Monday, killing 14 members of the Afghan security forces, a local official. The Taliban quickly claimed responsibility for the attack, like reported by necn.com.

The attack came even as Taliban officials told The Associated Press just hours earlier that a temporary, nationwide cease-fire has been agreed upon among their council leaders. It wasn’t clear when the cease-fire would go into effect.

Of the 14 fatalities in the predawn attack in the Jawzjan province, 13 were members of a pro-government militia and one was a policeman, said Abdul Maroof Azer, the governor’s spokesman.

Five other militiamen were wounded and two are missing, according to Azer. He said reinforcements later managed to reach the area and that the compound is now firmly back under government control.

Meanwhile, the U.S. military in its daily report of overnight military operations with Afghan forces said that 30 Taliban fighters were killed across the country and several other insurgents detained.

The Taliban have intensified their attacks in northern Afghanistan in recent days. They targeted a local militiamen compound in northern Takhar province on Sunday, killing at least 17 Afghan militiamen. On Friday, at least 10 Afghan soldiers were killed in an attack on a checkpoint in southern Helmand province.

Last Monday, an American soldier was killed in combat in northern Kunduz province. The Taliban claimed they were behind a fatal roadside bombing that targeted American and Afghan forces there. Also last week, a Taliban attack on a checkpoint killed at least seven Afghan army soldiers in northern Balkh province. Another six Afghan troops were killed in the same province Thursday in an attack on an army base.

The Taliban today control or hold sway over half of the country and, along with IS, stage near-daily attacks targeting Afghan and U.S. forces and Afghan government officials. Scores of civilians die in the cross-fire. The insurgents are at their strongest point in the 18-year war, America’s longest conflict.

A cease-fire had been demanded by Washington before any peace agreement could be signed. A peace deal would allow the U.S. to bring home its troops from Afghanistan and end its 18-year military engagement there, America’s longest.

The White House said it would have no comment on the cease-fire reports. The Taliban did not specify the duration of the cease-fire, though it was suggested the truce would last for 10 days.

The U.S. wants any peace deal to include a promise from the Taliban that Afghanistan would not be used as a base by terrorist groups. The U.S. currently has an estimated 12,000 troops in Afghanistan.