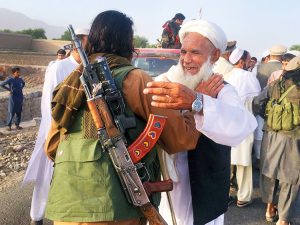 The radical Taliban movement, which has seized power in Afghanistan, maintains close contacts with the terrorist groups Islamic State and Al-Qaeda, the chief of the external relations office of Afghanistan’s National Resistance Front, opposed to the Taliban, Ali Maisam Nazary.

“The Taliban’s contacts with international terrorism remain. The Taliban are simply unable to break these ties, because they give the terrorists a chance to acquire legitimacy. All expectations the Taliban will break with extremist groups are absolutely groundless,” he said.

“The Taliban furnish support for terrorist groups and make them stronger every day. At the moment, there are no clear delimitation lines among the Taliban, Al Qaeda and the Islamic State,” he added.

The militia’s spokesman said the recent killings of Afghan public figures and politicians, as well as terrorist attacks in Afghanistan had been committed by Taliban militants operating in Islamic State members’ disguise.

“The terrorists from the Taliban, the Islamic State and Al-Qaeda may bear different names and have different covers, but ideologically they are all the same,” Nazary said.

Also, the National Resistance Front’s spokesman stressed that the Taliban preserved tight contacts with the terrorist organization Islamic Movement of Uzbekistan (outlawed in Russia) and the extremist group Jamaat Ansarullah, banned in Tajikistan. “The Taliban’s close contacts with international terrorists threaten not only Central Asian countries, but the whole world,” Nazary concluded.

The Taliban movement launched a massive operation for establishing control of Afghanistan after the United States last spring declared its troop pullout. On August 15, the Taliban entered the capital Kabul without encountering any resistance, while President Ashraf Ghani fled the country. Forces opposed to the radicals organized resistance in northern Afghansitan’s Panjshir Province under the leadership of Ahmad Massoud. Afghanistan’s former vice-president, Amrullah Saleh, who proclaimed himself as acting head of state, urged support for Massoud.

On September 6, the Taliban’s spokesman Zabihulla Mujahid said that the Taliban had taken over the whole of Panjshir and the war in Afghanistan was over. Massoud claimed that the resistance to the Taliban was continuing and called upon the population for a national uprising. Nazary later said the resistance movement was beginning a guerilla war.

Although the past three months have seen acts of terrorism and armed attacks in Afghanistan against civilians, Taliban officials have repeatedly said that the problem of the Islamic State in the country had been eliminated and stressed that it was “no longer a threat to but only a headache” for the Afghan people.