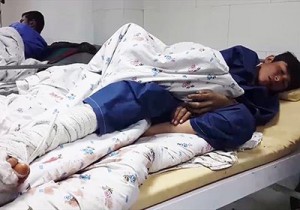 A teenager, who survived Tuesday night’s deadly shooting of 36 people by Daesh in Ghor province, says the group carried out the mass killing after learning of the death of their commander.

Ghausuddin who sustained injuries in the shooting and is being treated at a local hospital in Ghor told TOLOnews that Daesh fighters had attacked their area and taken farmers, shepherds and children hostage. They also took hundreds of sheep with them.

According to him, the insurgents took their hostages to Ghamlin area in the province but after getting news of the death of their commander they lined everyone up and started shooting them.

He said the fighters said at the time they will shed the blood of civilians in revenge for the killing of their commander.

“They lined us up in a row near a mountain and then three armed men came on motorbikes and told us that the blood of all of us is equal to the blood of their commander. And then they started shooting us,” the survivor said.

“I pretended to be dead, but they still fired more bullets at my legs,” he added.

Meanwhile, a number of Ghor residents, who attended the funeral ceremony of the victims, called on government to take action to against the insurgents.

“Criminals have always killed the poor people in a brutal way, but we have not witnessed even a single military operation by government against their crimes,” said Khudayar Waqif, a resident of Ghor.

“Our demand from government is that it should launch a large-scale military operation against those that commit crimes, kill innocent people and violate the rights of the poor people,” said Gul Ahmad, another resident of the province.

The residents said the groups that killed the people are known in the area and that this was not their first time they killed civilians.

“This needs serious attention by government. Because, those who have lost their lives had families and children and now they need care,” said Sima Joyenda, former governor of Ghor.

Meanwhile, commander of the army’s 207 Corp, Gen. Muhayuddin Ghori, who attended the funeral ceremony, said he will take action to avenge the deaths of the 36.

“I assure you I am committed to taking the revenge of the martyrs from the country’s enemies,” he said.