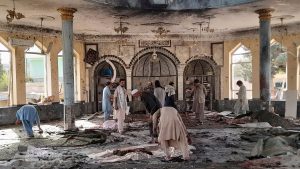 The Islamic State of Khorasan Province (ISKP), an armed group affiliated with the Islamic State (ISIS), is carrying out bombings and other targeted attacks against Afghanistan’s Shia religious minority that amount to crimes against humanity, Human Rights Watch said today. The group has also carried out other mass casualty attacks, including the August 29, 2021 suicide bombing at Kabul’s airport that killed 170 Afghans, mostly civilians.

The ISKP has claimed responsibility for many recent unlawful attacks on the Hazara Shia community, including suicide bombings that killed at least 72 people at the Sayed Abad mosque in Kunduz on October 8, and a bombing that killed at least 63 people at the Bibi Fatima mosque in Kandahar on October 15. After the Kandahar attack, ISIS issued a statement saying it would target Shia in their homes and centers “in every way, from slaughtering their necks to scattering their limbs… and the news of [ISIS’s] attacks…in the temples of the [Shia] and their gatherings is not hidden from anyone, from Baghdad to Khorasan.”

“The ISKP armed group has repeatedly carried out devastating attacks that appear designed to spread terror and inflict maximum suffering particularly on Afghanistan’s Hazara community,” said Patricia Gossman, associate Asia director at Human Rights Watch. “The numerous attacks targeting Hazaras amount to crimes against humanity, and those responsible should be brought to justice.”

The ISKP has posed a serious threat to Hazaras and other Afghan civilians since at least 2015, when the Islamist armed group began attacks on mosques, hospitals, schools, and other civilian facilities, especially in predominantly Shia neighborhoods. These attacks have killed at least 1,500 civilians and injured thousands more, mostly religious minorities.

ISKP attacks have taken place in Kabul, Jalalabad, Herat, and other cities. Some have targeted Hindu and Sikh religious minorities, as well as Hazara. The ISKP has also killed journalists, civil society activists, and health workers, and targeted schools, particularly girls’ schools in Nangarhar in 2018. Their attacks first surged in 2016-2018 and then ebbed after the group suffered military setbacks in 2019. Since 2020, attacks have again increased.

Taliban authorities, who took over Kabul and most of the country in August, have said they would provide more protection for Shia mosques and other facilities. However, the Taliban also have a history of committing serious abuses against Hazaras, including large-scale killings during fighting in Mazar-e Sharif and Bamiyan in 1998-99. Recently, Taliban officials have singled out Hazara journalists for arbitrary detention and beatings, and Hazara communities for forced evictions.

The concept of crimes against humanity dates to at least 1915 and was part of the 1945 Charter of the International Military Tribunal that created the Nuremberg trials of Nazi leaders. Under the Rome Statute of the International Criminal Court (ICC), crimes against humanity are the commission of multiple grave offenses, such as murder and deportation, that are knowingly committed as part of a widespread or systematic attack directed against any civilian population by a state or a non-state group.

The ISKP attacks against the Hazara community have been widespread and systematic. Apparent crimes against humanity committed by ISKP include murder and other inhumane acts causing great suffering. The group’s public statements make clear that the murderous attacks reflect a deliberate policy.

On May 15, 2019, the United Nations Security Council’s Sanctions Committee on ISIS, Al-Qaeda, and associated individuals added ISKP to its sanction list and established an asset freeze, an arms embargo, and a travel ban on the armed group by member states.

The ICC prosecutor is seeking authorization from the court’s judges to resume an investigation in Afghanistan, which is party to the ICC statute. He has indicated that his office will prioritize alleged crimes by the Taliban and the Islamic State in Afghanistan, while deprioritizing alleged crimes by other parties. The prosecutor’s approach would perpetuate impunity for former Afghan government forces and US personnel implicated in serious crimes, Human Rights Watch said.

“ISKP’s horrific attacks on civilians have not abated since the Taliban takeover of Afghanistan and appear to be increasing,” Gossman said. “The Taliban authorities need to urgently adopt measures to protect religious minority communities from attack.”

A partial list of major ISKP attacks, including seven attacks on Shia mosques, appears below.

The Rome Statute of the International Criminal Court defines crimes against humanity as one of several offenses “committed as part of a widespread or systematic attack directed against any civilian population, with knowledge of the attack.” “Widespread” refers to the scale of the acts or number of victims. A “systematic” attack indicates a pattern or methodical plan. Crimes against humanity can be committed during peacetime as well as during armed conflict by state or non-state actors.

The Rome Statute defines “attack” as a “course of action involving the multiple commission of acts… pursuant to or in furtherance of a State or organizational policy” (italics added). International case law clarifies that the “attack” does not need to be a military attack as defined under international humanitarian law. Furthermore, “the term ‘population’ does not require that crimes against humanity be directed against the entire population of a geographical territory or area.”

The ISKP attacks are widespread. The group has killed more than 1,500 civilians and wounded over 3,500, primarily by bombing civilian facilities such as Shia mosques and Shia educational institutions, as well as hospitals, sports centers, and other gathering places in Shia neighborhoods and at Shia or Hazara events in Kabul, Jalalabad, Herat, and other cities. The consistent nature of the attacks over a six-year-period indicates a pattern, if not a methodical plan, and supports the conclusion that these attacks are systematic.

Statements from ISKP leaders since 2015 and as recently as October 2021 indicate that the deadly targeting of Shia civilians has been deliberate. In July 2016, for instance, following an attack on Hazara protesters in Kabul, the ISKP stated that Shias “were undisputed infidels and… whoever doubts this or the right to kill them are, in turn, apostates.”

Some major attacks claimed by or likely to have been committed by ISKP include:

October 15, a suicide bombing during Friday prayers at a Shia mosque in Kandahar killed at least 63 and injured 83. ISKP claimed responsibility.

October 8, a suicide bombing during Friday prayers at a Shia mosque in Kunduz killed at least 72 people and injured over 140. ISKP claimed responsibility.

June 9, gunmen killed 10 humanitarian deminers in Baghlan after first asking who among them were Hazara. ISKP claimed responsibility.

May 14, a bomb exploded inside a Kabul mosque as worshipers gathered for the Muslim festival of Eid al-Fitr, killing at least 12 people and injuring another 15. ISKP claimed responsibility.

May 8, three explosions at the Sayed al-Shuhada school in the Dasht-e Barchi neighborhood of Kabul as girls’ high school classes were ending killed at least 85 people, including 42 girls and 28 women, and injured over 200— the vast majority from the Hazara community. The attack was unclaimed but occurred in a predominantly Hazara neighborhood that ISKP had repeatedly targeted.

March 4, gunmen fatally shot seven Hazara laborers at a plastics factory in the Sorkh Rod district of Jalalabad. No group claimed responsibility, but it followed other recent ISKP attacks in the area.

November 2, at least 35 were killed and more than 50 others were injured, including many students, in an attack on Kabul University. ISKP claimed responsibility.

October 24, a suicide bombing killed at least 30 people and injured another 70 outside an educational center in Kabul. ISKP claimed responsibility.

May 12, gunmen attacked a hospital maternity ward in the Dasht-e Barchi neighborhood of Kabul, killing 24 people, including two children and 15 women who were in labor. The attack was unclaimed but occurred in a predominantly Hazara neighborhood that ISKP had repeatedly targeted.

May 12, a suicide bombing at a funeral in Nangarhar killed at least 25 people and wounded 68. ISKP claimed responsibility.

August 17, a suicide bombing at a wedding hall in Kabul killed at least 92 people and injured over 140. ISKP claimed responsibility for the bombing, stating that the attack targeted Shias.

September 5, two bombings at the Maiwand Wrestling Club in the Dasht-e Barchi neighborhood of western Kabul killed 20 people, including two journalists who were covering the first bombing. ISKP claimed responsibility.

August 16, a suicide bombing at Kabul’s Mawoud Academy killed 40 students and injured at least 67, most of them Hazaras. ISKP claimed responsibility.

July 1, a suicide bombing in Jalalabad killed 19 members of a Sikh and Hindu delegation who were on their way to meet then-President Ashraf Ghani. ISKP claimed responsibility.

June-December 2018: On June 3, ISKP announced it would target educational facilities, particularly girls’ schools in Nangarhar province, and followed through with attacks on schools and the Provincial Education Department in Jalalabad city on June 11; the Jalalabad city Education Department on July 11; and the Community Nursing and Midwifery Education Institute on July 28. Attacks in this period killed 25 and injured 39.

January 24, militants carried out a bomb and gun attack on a Save the Children office in Jalalabad, killing six people and injuring 27. ISKP claimed responsibility.

October 20, a suicide bombing at a Shia mosque in Kabul killed at least 65 people and wounded 87. ISKP claimed responsibility.

August 1, a suicide bombing at the Jawadiya Mosque in Herat killed at least 31 people and injured 65. ISKP claimed responsibility.

July 23, twin suicide bombings in Deh Mazang Square in central Kabul targeted protesters, predominantly Hazaras, who were demonstrating against a government decision to reroute a power project, bypassing a Hazara majority area of the country. At least 85 people were killed and 413 injured. ISKP claimed responsibility.

April 18, a suicide bomber struck a bank in Jalalabad, killing at least 33 people and injuring another 100. It was first major attack claimed by ISKP.