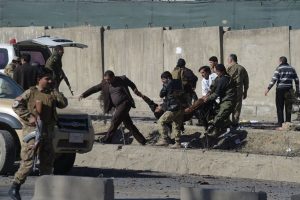 At least two civilians, one policeman and one Resolute Support (RS) soldier were killed when a suicide bomber targeted a convoy of foreign forces in Qarabagh district in Kabul, like reported by ariananews.af.

In a statement, the Resolute Support confirms that one NATO soldier was killed and six personnel (five troops and one interpreter) were wounded when their patrol was attacked.

“The patrol was conducting a partnered mission with the Afghan National Army when a personnel-borne IED detonated,” the RS statement said.

The statement added that the RS personnel who were wounded are being treated at the U.S. military hospital at Bagram Airfield.

The Taliban group has claimed responsibility for the attack.

This is the second attack on NATO convoy in the current week. On Wednesday, a suicide bomber attacked a convoy of the international troops in Kandahar province and killed two American soldiers and wounded four others.