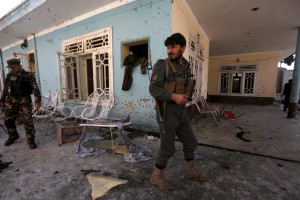 At least 13 people were killed in a suicide bomb attack in the eastern Afghan city of Jalalabad Sunday. The blast targeted the house of a prominent politician when the compound was crowded with people invited to a family event.

According to local media reports, the attack took place during a gathering of tribal leaders who had arrived to celebrate the release of the provincial council member Obaidullah Shinwari’s son from Taliban captivity. The son, who had been held hostage by the Sunni militant group for nine months, was killed, while 14 others, including the father, were reportedly injured in the attack.

“The number of casualties is likely to increase because there were so many people there,” Ataullah Khyogani, spokesman for the Nangarhar provincial government, was quoted as saying.

No group has yet claimed responsibility for the attack, which comes just days after the Pakistani consulate in the restive city was targeted by a suicide bomber. The previous attack, for which the Islamic State group claimed responsibility, killed seven members of the Afghan security forces.

Militant attacks are not uncommon in Jalalabad. The capital of the Nangarhar province, which borders Pakistan, has been, on several occasions, targeted by insurgents seeking to end any peace negotiations and consolidate their positions.

Since the start of the new year, militant attacks have also intensified elsewhere in Afghanistan, even as representatives from four nations — Afghanistan, Pakistan, China and the United States — recommenced long-stalled peace talks in Islamabad.

During the first week of January, a restaurant frequented by foreigners in Kabul was attacked, and, last week, the Indian consulate in the northern city of Mazar-i-Sharif was besieged for more than 24 hours. Down south, in the volatile Helmand province, 11 people, including nine police officials, were killed in attacks on police checkpoints Wednesday.