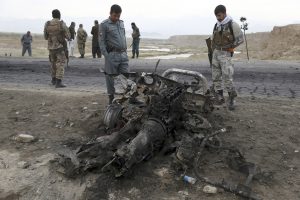 A suicide truck bomber targeted a police district headquarters in Afghanistan’s southern Kandahar province on Wednesday, killing three officers, a local official said. Three other police officers, including a district police chief, were killed in a roadside bombing in eastern Ghazni province, like reported by dailymail.co.uk.

The Taliban claimed responsibility for both attacks.

In the Kandahar attack, the suicide bomber struck in the district of Shah Wali Kot, according to Bahir Ahmadi, the provincial governor’s spokesman. The explosion also wounded 14 people, both policemen and civilians.

Ahmadi said the guards at the district headquarters realized the truck was suspicious and opened fire before it could reach the building. But the shooting set off the explosives’ load, triggering a huge blast that caused the casualties and damaged several nearby buildings as well as the district headquarters, which also houses the office of the police chief and the district administrative department.

In the roadside bombing in Ghazni, Wahidullah Jamazada, the provincial governor’s spokesman, said Habibullah, the police chief of Dayak district, was killed along with his two bodyguards. Habibullah, who like many Afghans used only one name, was inspecting checkpoints early in the morning when the attack happened, Jamazada said.

Separately, the Defense Ministry said Afghan soldiers repelled Taliban attacks on Tuesday on army checkpoints in the district of Khogyani in eastern Nangarhar province. The statement said at least 20 Taliban insurgents were killed, including their group leader.

The Taliban did not claim responsibility for the Nangarhar attack or issue any statements about it. Both the Taliban and the Islamic State group are active in eastern Afghanistan, especially in Nangarhar. Afghanistan has seen a recent spike in violence, with most attacks claimed by the local IS affiliate.

The Taliban and the Afghan forces have been trading blame over the recent surge in attacks across the country – even as peace efforts press on to try and bring about the start of a direct peace talks between the Afghan government and the Taliban.

The Taliban accuse government forces of targeting them in their homes, their families bearing the brunt of those anti-Taliban operations. Kabul, meanwhile, accuses the Taliban of stepping up attacks against both civilians and the security forces.

The violence has been a key obstacle to any negotiations between the Taliban and the Kabul government – talks that were envisaged by the U.S.-Taliban deal signed in late February to end 19 years of war in Afghanistan.