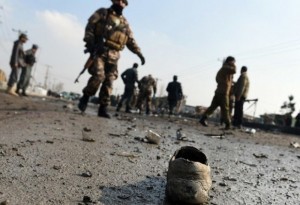 At least four people were killed following a suicide attack carried out by a foreigner woman in eastern Nangarhar province of Afghanistan, local officials said Friday.

The incident took in Jalalabad, the provincial city of eastern Nangarhar province late on Thursday night.

Provincial governor spokesman said at least three children and an operative of the Afghan intelligence – National Directorate of Security (NDS) lost their lives in the attack.

There are no reports regarding the identity of the foreigner woman who detonated the explosives strapped in her body but Khogyani said the incident took place while the Afghan intelligence operatives were conducting a search on a group of suspected foreigners travellign in Daronta area.

Khogyani further added that five men were also among the group of the suspected foreigners travelling in a car when they were stopped for search and questioning.

Nangarhar is among the relatively volatile provinces in eastern Afghanistan where anti-government armed militant groups are actively operating.

Certain district of Nangarhar province have also became a hotbed for the insurgents pledged allegiance to the Islamic State of Iraq and Syria (ISIS) terrorist group.