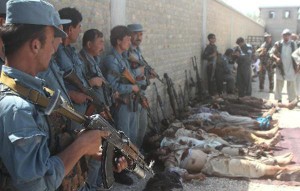 A senior Taliban commander has been killed with nine of his companions in an aerial strike in eastern Laghman province wrote Khaama.

A statement issued by the media office of Laghman province states that the strike was conducted on a group of insurgents in the mountainous area of Bomby in Dawlat Shah area around 11:30 AM today.

The statement adds that Noor Shah Chapaw, Zakir and Sadullah were among the ones killed in the strike.

According to the statement Noor Shah Chapaw was the so-called Taliban governor for Dawlat Shah District and general commander for Dawlat Shah, Alishang and Badpakh districts.