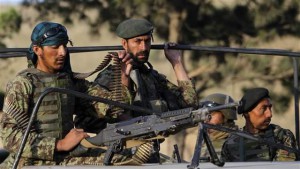 Officials at the Ministry of Defense say that a group of Taliban insurgents attacked security check posts in Baryali and Bargam areas of Ghazi Abad District around 04:00 am this morning.

According to the officials, the attacks begin from four angles but security forces gave a befitting response to the militants and failed their intentions.

Officials say that forces used heavy weapons in the clash in which dozens of militants have been killed and several others wounded.

Two policemen also embraced martyrdom in the skirmish while defending their country.

Taliban had not commented on the report by the time this report was filed.