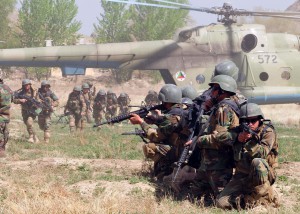 A statement issued by the Ministry of Defense states that hundreds of Taliban launched coordinated attacks on two security posts in Narai District of Kunar province around 05:00 am this morning.

The statement adds that reinforcement was on its way to support soldiers at Sifatullah and Shaheed Abdul Bari posts when it came under ambushes in three areas.

According to the statement 48 militants were killed and wounded in the clashes on the way and at security posts.

The statement further states that 22 militants were killed and 26 others wounded.

The press release further states that those killed include a local militant commander Abdul Hameed and those wounded include another local commander Kamal.

Afghan ground forces were also supported by air force in the fighting.

Three dead bodies of the militants were left on the ground. One soldier embraced martyrdom and another wounded in the exchange of fire with insurgents, the statement adds.