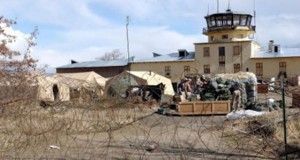 An American citizen has been killed in a rocket attack in Bagram Airfield in Afghanistan’s Parwan province.

Davis was working at the agency’s disposition services unit which includes the destruction, sale or other removal of excess U.S. equipment and supplies and died after a rocket landed on its location from outside the base.

AP news agency is quoting Kenneth MacNevin, a spokesman for DLA, as saying that Davis was the first civilian of the agency killed in Afghanistan.