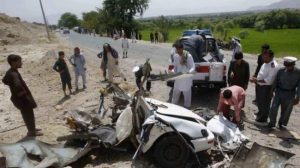 Eight Afghan civilians, including women and children, were killed on August 8 when their vehicle struck a roadside bomb in the northern Balkh province, an official says according to rferl.org.

Six other civilians were wounded in the explosion, which happened in the Shulgar district, said Sher Jan Durrani, the spokesman for the provincial police chief in Balkh.

Durrani blamed the attack on the Taliban.

Gelani Farhad, the spokesman for the provincial governor, says six insurgents were killed in the ensuing gunbattle. .

Roadside bombs, also known as improvised explosive devices (IED), remain the leading cause of civilian casualties in Afghanistan’s conflict, accounting for 45 percent of cases, the UN said in a report last month.