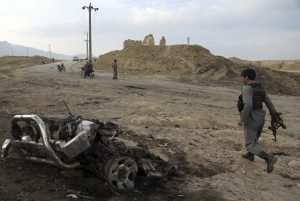 The incident happened when a car carrying Taliban militants was hit by the roadside bomb in Yol Buldi village of Dawlat Abad district, the army’s 209 Shaheen Corps said in a statement.

No civilian or security personnel were hurt in the blast, the statement added.

The blast comes during a week-long reduction in violence ahead of US-Taliban deal scheduled to be signed on Saturday.