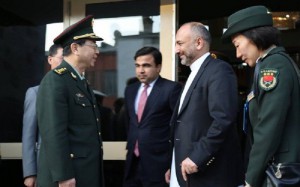 Spokesperson for the National Security Advisor, Tawab Ghorzang, said that the two sides held in-depth talks about Afghanistan and regional security issues, and about China’s military and economic aid with Afghanistan.

Atmar said that the government and people of Afghanistan are thankful to China for its unconditional support in the past 13 years. “Afghanistan considers China a committed partner in the region,” he said, adding that Afghan government was committed and willing to work jointly with China for securing mutual and regional interests.

Atmar welcomed the proposal of Fenghui that Afghanistan, China, Tajikistan, and Pakistan militaries should form a Joint Coordination Mechanism for regional security and fight against terrorism.

He added that Afghanistan was optimistic to the Quadrilateral Coordination Group (2+2) meetings’ outcomes and the Afghan peace process in the presence of China and the US.

Fang Fenghui reaffirmed his country’s commitment to help Afghanistan. He promised that China would discuss and consider Afghanistan’s request for military aid.

The visit of a top Chinese military general is coming at a time when the four-nation in its February 23 meeting on Afghan peace process scheduled the first direct talks between the Afghan government and the Taliban in the first week of March.

As a member of the QCG, China could play key role in restoring peace and security in Afghanistan due to its influence over Pakistan. China could bring pressure on the Taliban through Pakistan to join the peace talks. The Afghan masses have pinned high hopes on the next meeting and it’s because of China and the US representatives.